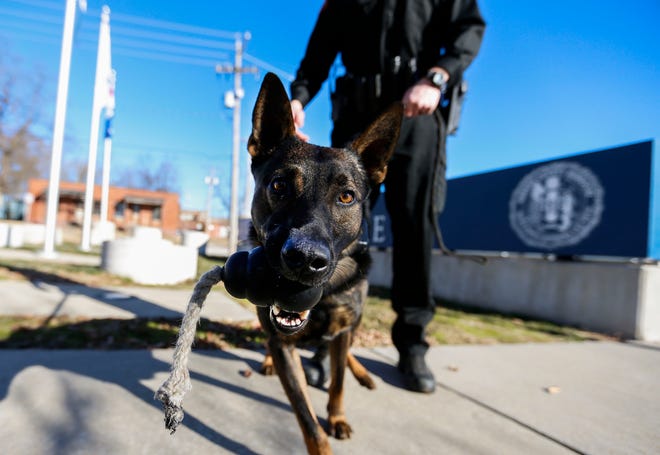 The four dogs employed by the Greene County Sheriff’s Office are the cream of the crop.

The sheriff’s office uses its K-9 officers to find illegal drugs and track down fleeing suspects.

But the dogs weren’t born ready for police work.

The job of getting dogs trained up to the sheriff’s office’s standards falls to Deputy Phil Yarnell, a retired Springfield cop who now serves as the department’s head dog trainer.

“We use our dogs extensively,” Yarnell said. “Our dogs are constantly working the roads and we have a high rate of success in finding narcotics or finding people.”

Yarnell is in charge of testing and selecting dogs, putting the handler and dog through a 12-week training program, keeping up with equipment needs and then providing additional training for the dogs throughout their careers.

The News-Leader reached out to Yarnell earlier this month to get some dog training tips for anyone who finds a puppy under their Christmas tree this year. Here’s what he had to say:

Yarnell said the biggest mistake people make is buying a puppy on a whim without first having the infrastructure in place.

Before bringing a dog home, Yarnell said to ask yourself if you’ve thought about a good veterinarian to de-worm the dog and how you are going to purchase things like a kennel, food, a bed and teething toys.

In addition to being expensive, having a puppy is also time-consuming. Yarnell warned against purchasing a puppy unless you have time to work with the animal and keep it occupied.

Yarnell said one of the most important things to consider before buying a dog is where it comes from, since genetics play a big role in whether a dog will have issues down the road.

“Buy from a quality supplier,” Yarnell said. “Don’t buy from a puppy mill or you are probably going to end up with problems, medical problems.”

Yarnell also suggested researching and hiring a qualified pet dog trainer to help you work with the animal. That can be expensive, but Yarnell said it is worth it.

“It will pay huge dividends in the end,” Yarnell said.

Read more:Major is set to become the first shelter dog, this may be good news for Missouri

Yarnell said there is a misconception that dogs have to be a certain age before you can start training them. He said it’s important to get the puppy started early with simple things like recognizing leash pressure and coming when its name is called.

“That dog needs to go into training immediately,” Yarnell said.

He said food treats are helpful, especially in the early stages.

“The first thing is finding out what the dog wants to work for,” Yarnell said. “So with puppies, 99 percent of the time it’s going to be food.”

Yarnell said dogs are incredibly social animals, and it’s important to establish a friendly relationship with your puppy to help the dog respond better to training.

He said that can be achieved through play time, fetch, going for walks and working with toys.

Yarnell said people are usually able to train their puppies to do simple things like sit or lie down, but an aspect that people often neglect is manners.

He said it’s important to train the dog to not jump on guests or bolt through the door as soon as it’s opened.

“You’ve got to put the restrictions on the dog,” Yarnell said.

Some ways that Yarnell teaches dogs manners is by making them sit down calmly before he will open the door to their kennels or not letting them go outside without permission.

Yarnell said he modifies his training depending on what works best for each particular dog and what the animal best responds to.

“There’s no one set way to train dogs,” he said.

One tenet to keep in mind though, Yarnell said, is that if the dog does something you don’t like, then eliminate the opportunity for the dog to do that action.

For example, Yarnell said he had someone call him with a problem of the dog jumping up on the kitchen counters in the middle of the night — eating food and knocking things on the ground.

So, Yarnell simply suggested keeping the dog in the kennel at night or putting a leash on the dog at night and sleeping with the other end around your wrist. For the man who called Yarnell, he said, that solved the problem in less than a week.