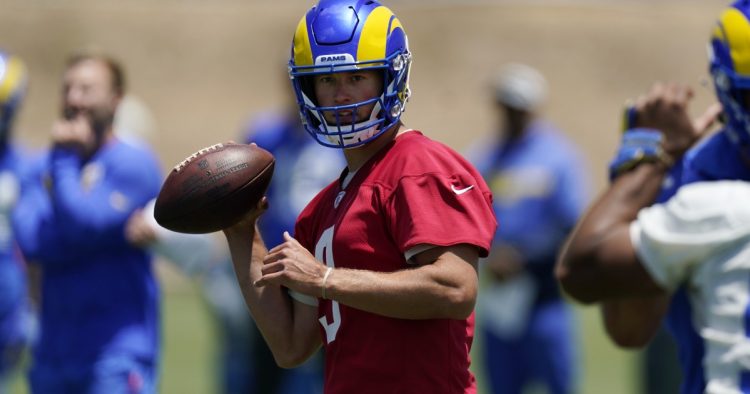 Matthew Stafford didn’t look like it, not with his confident and pinpoint throws, but he said his first day of Rams training camp made him feel like a kid again.

“It’s brand new,” said Stafford, 33, acquired in January from Detroit in a deal that sent the Lions two first-round picks, a third-rounder and quarterback Jared Goff. “Parts of the day, parts of me feel like a rookie. I’m walking around trying to learn everybody’s name, who knows what and all that kind of stuff. Trying to perform at a high level is a challenge, but I’m loving it.”

He threw some flawless spirals, including a deep ball to DeSean Jackson for a touchdown that had the spectators in the UC Irvine bleachers erupting in cheers.

“It was awesome,” he said of playing in front of fans. “We kind of missed out on this last year. The first 11 years of my career, some version of this is what it felt like. It kind of helped us get through practice to be honest with you. The first day’s easy for us because we love coming out here and doing it. But as camp goes on, when we get these fans out here cheering us on, it really helps us out.”

“There’s a lot of little nuances and we’re still getting things figured out on Day 1,” McVay said. “But he definitely has great command, we could all feel that.”

—Cornerback Dont’e Deayon had a pretty leaping interception of a Stafford pass intended for Jackson. It was a jump-ball throw that Deayon won before falling backward and holding on to the ball. For Jackson, it looked as if an early-camp ball, meaning a pass he would have fought much harder for had it been in a game or if his roster spot were in question.

—Second-year safety Terrell Burgess, whose impressive rookie season was cut short by a broken ankle in Week 7, made some splashy plays on the first day of camp. He intercepted a John Wolford pass, and broke up a Stafford throw for Jackson who was running up the seam. After the latter, McVay came over to the defensive side to congratulate and praise the young defensive back. “Terrell’s a guy that’s really flashed,” McVay said. “I thought he was just hitting his stride before he got injured. Really confident in the player he can become, and today he started off the right way.”

—With Michael Brockers now in Detroit, defensive tackle A’Shawn Robinson has some big cleats to fill. Brockers was an excellent player in his right, but one of the aspects of his game that made him so valuable was the way he worked so seamlessly with Aaron Donald. That allowed Donald to cut loose and freelance without worrying about the rest of the defensive front breaking down. “He knew how to rush, how to play off me,” Donald said. “You play with somebody long enough, it’s yin and yang.”

—There wasn’t a large body of work to study, but McVay was impressed by the large body snapping the ball. Austin Corbett has moved over to center from right guard, replacing Austin Blythe, who signed a free-agent deal with Kansas City. “I was really encouraged with the communication, the command, the poise that he displayed,” McVay said. “I thought he was accurate in terms of some of the ‘gun snaps. It was a good first day for him. We had minimal full-speed reps, but it seemed like he did a nice job in those ones we did have.”

—Donald was making his first public comments since being falsely accused of assaulting a man outside a Pittsburgh-area club in April. Video surveillance footage showed Donald attempting to break up a fight that caused multiple injuries to accuser DeVincent Spriggs. Through his attorney, Spriggs later extended a formal apology to the Rams star. Asked about fallout from the incident, Donald said: “I was just training, man. I was just getting myself prepared for this upcoming season and wasn’t much worried about other stuff. Just working, spending time with my kids and my family. … Staying out of trouble.”

—First-year offensive line coach Kevin Carberry was not at practice, and Sean McVay later confirmed he has tested positive for COVID-19 despite being vaccinated. In that case, he’s eligible to return after two negative tests taken at least 24 hours apart.