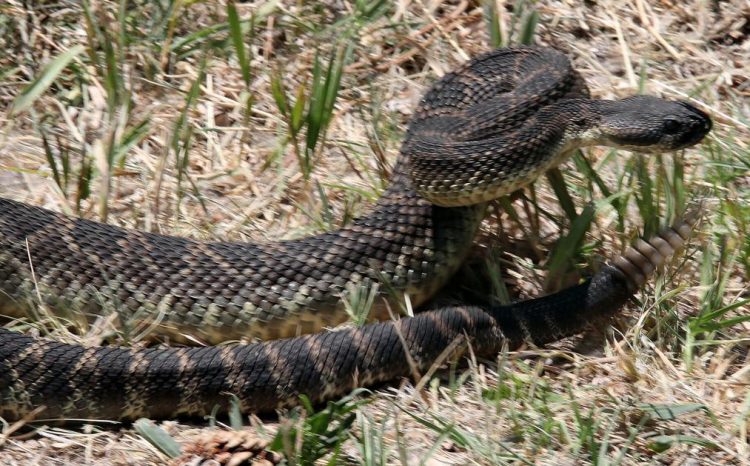 That won’t be happening again, as she and her mother, Julieanne Shepherd, who was walking Lucie that day, got their two dogs rattlesnake trained Friday by Canyon Country Animal Hospital.

Shepherd, who said the pair moved from Salida to the Grand Valley because they didn’t trust the rattlesnake situation, said the training was “just awesome.”

“We’ll definitely do this just to keep our dogs safe,” Shepherd said.

The training was put on by Andy Andrews, a self-described “dog hiss-perer,” who brought 20-25 rattlesnakes to Grand Junction from southern California to train the dogs.

Dog owners walked their dogs around and through the yard and when the dogs got too close to the snake cages or the snakes started rattling, Andrews used a shock collar to make sure the dogs wouldn’t forget the experience.

”Basically, what is in the vernacular of the youth of today, this is an intervention,” Andrews said.

The shock lets the dogs know creatures that look, smell or sound like rattlesnakes are not to be trifled with.

“Now the smell means something it didn’t before because the dog didn’t know what it was smelling,” Andrews said.

”It’s a big responsibility of owning a dog, and that’s to take care of it,” Andrews said.

Leo, Ron Wilson’s border collie, won’t be forgetting anything. Andrews and Wilson led Leo through the training and Leo picked it up after the first shock.

As Wilson led Leo around the yard to the snake cages, Leo had absorbed the message almost too well, and would get as far as he could from the snakes.

This prompted Andrews to prod the cage with his foot to get the snakes to rattle, calling, “What do you say, Mr. Snake?”

Some dogs can be slow to pick up on the training. Leo was not one of those dogs. Wilson took him around the yard to the cages a couple more times, and each time Leo avoided the cages as if they were filled with, well, rattlesnakes.

For a final test, Andrews pulled a rattlesnake out of a bucket with some long snake tongs and set it on the ground 10-15 feet in front of Leo and Wilson. It’s impossible to know what exactly a dog is ever thinking but Leo certainly wasn’t thinking of going near the snake.

Leo, it should be noted, is a border collie and as such is a pretty bright dog. He picked up on the training faster than most.

“You won’t have to worry about him,” Andrews said to Wilson. “That’s an imprint forever.”

“I’m convinced,” Wilson said when he took Leo around the yard after the training.

About 60 dogs were scheduled to receive the snake training Thursday, Friday and Saturday, according to Canyon Country Office Manager Alyssa Trane. The animal hospital added a day this year because the training is becoming more popular.

“Every year we get busier and busier,” Trane said.

Andrews said he has not heard of any of the dogs that have received his trainings getting bit by rattlesnakes.

Dr. Dunn has already treated one dog this season for a rattlesnake bite, Trane said.

That dog lived after it was treated with antivenom, Trane said.

According to Colorado Parks and Wildlife, those who encounter a rattlesnake in the wild should simply back off.

If bitten by a rattlesnake, call 911 and remain calm, according to the Mayo Clinic.

Andrews, 82, estimates he has been doing this for more than 50 years, coming to Grand Junction to do the trainings for the past six after he got connected with Dr. Dunn.

Despite appearances, Andrews doesn’t consider himself a snake person. The snakes that have bitten him would probably agree. Andrews has been bitten four times, the first of which came when he was 75 years old.

“I’m not afraid of them, but I know what they can do because I’ve been bit,” he said.

His father was a game warden, Andrews said, and the family had hounds that would run after animals.

Dogs, especially hunting dogs, don’t pay attention to anything else when they’re on the chase, Andrews said, and the dogs would get bit by snakes they didn’t notice. It got to the point where he had to do something, so he developed his training method.

Other dog/snake trainers use the same techniques as Andrews but with bull snakes.

He said he uses rattlers because you can’t imitate the sound or smell of a rattlesnake with a bull snake, and sound and smell are a dog’s main senses.

Rattlesnakes smell different than other snakes because they eat prey that has been poisoned, Andrews said. The poison can’t be digested, so it comes out a snake’s skin and dogs can pick up on the smell.

Andrews collects the snakes for his training from the Etiwanda Game Association, a 1,400-acre hunting club in Hesperia, California that he runs.

When the training is over, Andrews will release the snakes back into the wild and catch new ones for the next training. He said he likes for the snakes to be as wild as possible.

“Let’s try to be as close to reality as we can,” Andrews said.

Scott Dunn, Kyle Dunn’s brother, has seen the effects of the training on his own dogs. He walked through the course with each of his 18-month-old yellow labs, Prince and Paisley, and they did not want any part of the snake cages.

That’s especially good for Prince, who was bitten by a bull snake about a month ago.

“He’s needed this because he’s a hunting dog and has a lot of prey drive,” Scott said. “He’ll stick his nose into a snake.”

Based on Prince’s reactions to Andrews’ snakes, that won’t be an issue.

Regular pets are generally better at the training than hunting dogs because of their lack of prey drive, Andrews said, although hunting dogs have good enough noses they should be able to pick up a snake scent.

Leo the border collie, a regular pet, is slated to go on the Colorado Trail from Denver to Durango in a few weeks. Not having to worry about Leo getting bit is one less worry for his owner, Wilson. Wilson’s daily mountain bike ride will also become less stressful.

“We ride mountain bikes up in the hills and he ranges,” Wilson said. “I’ve always worried.”

“We don’t want anything to happen to them,” he said. “They’re our buddies.”