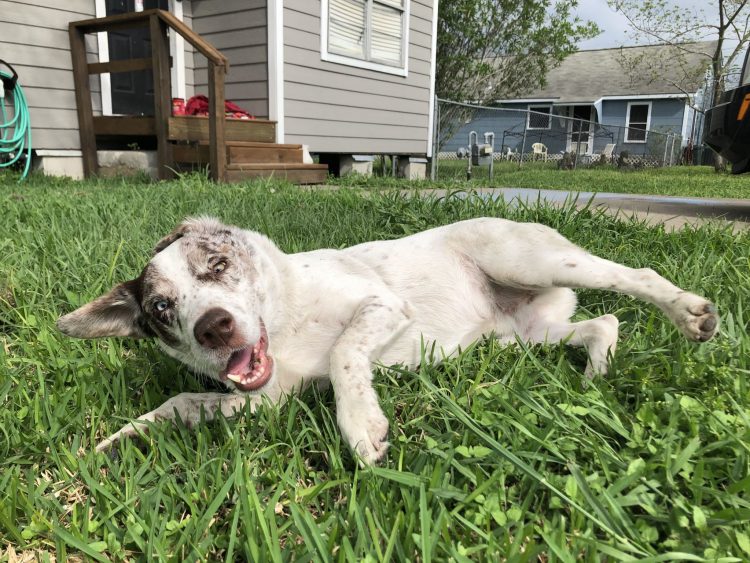 The first time I heard about Frank the Danbury dog, I knew I had to tell his story. I just didn’t expect that I would have to write the ending so soon.

A family friend introduced me to Frank back in the summer, at the height of Texas’ second COVID surge. She knew I often wrote about animal welfare issues and she wanted me to share Frank with the rest of Houston.

Frank, a 5-year-old Catahoula Cur mutt, had become a bona fide celebrity in tiny Danbury, population 1,201, about an hour south of Houston in Brazoria County. His daily escapades around town, including his seemingly miraculous knack for showing up at the doorsteps of pandemic-weary residents just when they needed him most, warmed the hearts of hundreds.

I visited Danbury and spoke with many residents over the last several weeks to learn more about this dog who had become so special to this small town. Tuesday morning, the day before a Houston Chronicle photographer and I were preparing to make the trek to Danbury to capture Frank in action, my phone buzzed with a text from Valerie Simpson, Frank’s owner.

“Frank was hit by a car yesterday evening,” it read.

I know reporters aren’t supposed to get emotionally involved with their subjects. But my heart sank. Fearing the worst, I called Simpson’s cell.

When I asked people in Danbury about Frank, so many told me: You have to talk to Trish Williamson.

Williamson, 54, works at the Dollar General off 5th Street. After more than a decade on the job, she is used to the daily demands and the long shifts. But lately, her personal life has been weighing heavy: Her mother and brother died recently, and now her father is extremely ill.

For a few months after their passing, she started breaking down at work. Seemingly every time she stepped outside to gather herself, she found a familiar white and brown spotted face with piercing blue eyes waiting for her: Frank, her “main squeeze,” as she called him.

“Every time I cry Frank shows up,” Williamson told me. “And it fills that emptiness. He fills my emptiness.”

He visited her at least four days a week, she said. Some days they would spend her lunch hour on the side of the store. Other days he would wait outside the front door, keeping guard while enjoying friendly pats from customers as they made their way inside.

Frank’s owner, Valerie Simpson, first saw him about two years ago when a few teenagers on bikes were trying to find him a home while circling the Danbury gas station everyone just calls “the food mart.”

Simpson, 37, had just gotten off of work. She was tired. She had to get home to her then 5-year-old daughter. But they were insistent. Couldn’t she offer him a place to sleep?

She caved and Frank became hers. But he could not be contained. Within weeks, Frank was regularly escaping Simpson’s yard and making his daily rounds: the Dollar General, the Main Street Steakhouse and Bar (where he would get plenty of leftovers), the city park, the food mart, St. Anthony’s Catholic Church for bible study and snacks

He crashed a backyard wedding and had been known to work the carpool line at the elementary school, showing up right on time for pick-up.

The small town quickly took notice of Frank’s adventures. In March at the start of the pandemic, a Facebook page was created for residents to share their Frank sightings. By year’s end, the page had followers all over the country, from Louisiana to Florida, wanting to know who Frank visited that day, or checking to see if he is back home safe on cold and rainy days.

“Before you knew it, he is the town dog, everybody knows him and everyone wants him to be the mayor,” Simpson said.

She met her boyfriend and father of her second child, Jarred, one night while out searching for Frank. It was after dark and Frank still wasn’t home, so she stopped by one of his favorite spots, the steakhouse. The restaurant was mostly empty except for one man who was sitting alone at the bar.

“I sat down next to him and drank a beer and it was just sort of history from there,” Simpson said. She looks down at her then-nine-month pregnant belly, stroking it and laughs: “Looking for freaking Frank.”

She named her baby girl Fallon. F, for Frank, she said.

Stacey Phillips Matheson, 56, had just lost her father the first time she saw Frank. George Phillips was a community figure of Danbury before he died from COVID pneumonia complications at the age of 75.

He and his wife Anne moved to Danbury 20 years ago after retiring from their mobile home business in Baytown. Over the last two decades, he entrenched himself in the community – serving on city council, in the Danbury ISD school system, in rotary and civic clubs, the library association.
He died on Nov. 21 after spending two weeks in the hospital.

An avid volunteer, George helped decorate the town park at Christmas. Every year they looked forward to the Christmas light arches that would line Avenue G where his family lived. It was just a few PVC pipes lined with alternating red and white lights that he had placed down the street for cars to drive under, but neighbors had come to know and love them as a town tradition.

Days after her father’s funeral, Matheson was turning onto her parent’s street when she noticed a few neighbors were in their yard. They had gotten the arches out and were setting them up down the road.

As she pulled into the driveway, her eyes welling up, her heart stopped when she saw Frank sitting at her parent’s doorstep. He was watching peacefully as the neighbors strung up George’s lights. She took it as a sign.

“Angels appear in different forms,” Matheson said. “It’s up to us to realize the goodness of everything around us.”

Simpson answered my call on the first ring.

“Frank is gone?” I asked incredulously, my voice breaking.

“He didn’t make it,” she said. Her voice started to tremble as she filled in the details of the accident. “He was hit by a car and he was suffering. We had to let him go.”

Stories have a way of writing themselves. I set out to write an uplifting profile of a celebrity dog. I wound up writing about a small Texas town’s broken heart.

But as tragic as his end was, Frank’s story continues to inspire. After news of his passing was shared with his Facebook community, tributes from residents and supporters from all over the country poured in.

“He was an earthly angel and now he is a heavenly angel watching over everyone,” one woman wrote. “God Bless Frank’s family and Danbury family.”

“My heart is broken, and as I sit here and cry, I can’t imagine (the) sadness in Danbury today, and especially his family,” another woman wrote. “We looked all the time, every time, we went to town. Frank was a legend. He will be missed by all.”

“Frank will forever hold a place in our hearts,” wrote another. “We will remember his beautiful blue eyes and his gentle personality.

“He was the perfect dog.”

Frank’s body will be cremated. Simpson said she plans to spread his ashes around Danbury.