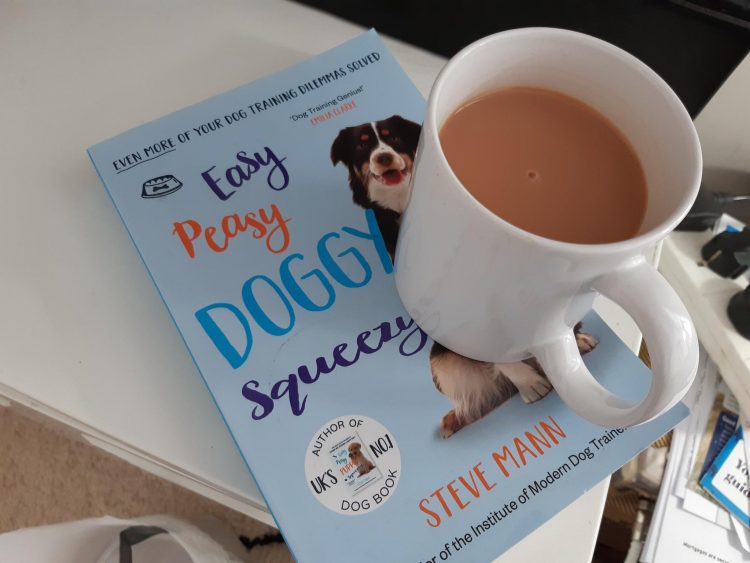 In search of that elusive ‘wonderful life-affirming experience.’

In fact, I would say Easy Peasy Doggy Squeezy by acclaimed dog trainer Steve Mann is the best bedside coffee cup coaster we’ve ever had.

It’s wide and long enough to accommodate two mugs of coffee while the two mugs in bed argue about who is taking Jasper (the dog) for a walk.

Fortunately, since Jasper isn’t my dog (he was bought by The German long before I stumbled on the scene), I hold the trump card. He’s not my responsibility. Except, there’s only so long you can pursue that line of logic. ‘Sorry love, I can’t make you a cup of coffee as that’s your kettle.’

The i newsletter cut through the noise

There’s a pecking order in our home. Parents, kids, dog. Or at least that’s how the theory goes. I suspect it depends on who you ask. I can’t help get the feeling I’m in competition with Jasper to scramble off the bottom rung. It’s proving a close-run thing.

Despite assurances from The German that I’m in the top two spaces, it’s not unusual for her to look me straight in the eye and say “Jasper, would you like a coffee?”

In an effort to assert what little authority I have and to share the burden of dog walking, I have volunteered to take him on solo walks. An opportunity to bond and enjoy a harmonious relationship with Jasper which, so says Steve Mann, will be a ‘wonderful life-affirming experience.’

It’s not going great. Jasper loves chasing a ball. I love throwing a ball. Perfect, you may think. Problem is, Jasper doesn’t like giving up his ball. You throw ball. He fetches. Drops it in front of him. You reach for ball and he grabs it in his jaws. This ‘game’ can go on for a while.

He’s possessive of his ball. He won’t give it up without a fight. Except when you don’t want it.

Jasper will carry that ball in his maw for as long as you are looking at him. Take your eye off him and he’ll just drop it and jog on. I’ve lost count of the number of balls he’s lost. To add to the pain, he angrily barks at you to throw the ball he’s just lost.

Barking is another of his annoying traits. I know, that’s what dogs do… but all the time? Whether it’s his continuous ‘throw me the ball’ bark or his out of the blue ‘break the silence’ howl causing you to splutter the coffee you just allowed to pass your lips, Jasper is out on his own in his bark annoyance timing.

But I’m sure we can work through this. After all, he is only a dog and I am Man. Maybe there’s a chapter in the manual about how to let dogs know who’s boss. I’ll have a read … after I’ve made Jasper’s dinner. He doesn’t like to be kept waiting…