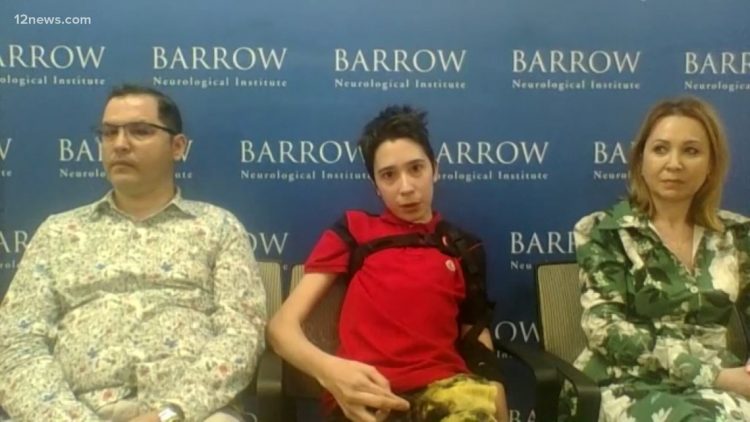 PHOENIX — Stephan Pascu’s nightmare began in 2016 when he had a sharp pain in his left arm and back. The now 15-year-old had a few more episodes over the next few years, with the most recent being last October.

“It made me fall into a coma for a few days and gave me more weakness on the left side,” says Pascu.

According to Barrow Institute, Spinal AVM’s are so rare that they only affect approximately 10 in every one million people. Doctors in Europe told him that his was too large and complex to remove.

“These things are basically abnormal tangles of arteries and veins in the spinal cord, so that normal flow of blood to the spinal cord is disrupted,” says Dr. Michael Lawton, President and CEO of Barrow Neurological Institute In Phoenix.

Without the surgery, Stephan would continue to suffer hemorrhages and the prognosis wasn’t good. He was facing the possibility of becoming a quadriplegic.

His was high in the cervical region so it was affecting his arms, his body, his legs causing issues with sensation and strength.

The Stephan’s family got a second opinion and referral to Barrow Neurological Institute after consulting Europe’s top neurosurgeons. Dr. Lawton and his team successfully removed the AVM after three surgeries.

Before traveling, they had to obtain special clearance to travel internationally as a result of the pandemic. Barrow’s assisted in securing special permission to travel for medical care.

Stephan, who can’t wait to return home to see his sister, friends and dog, is grateful for his outcome and hopes his story will help others.

“Stay hopeful, don’t listen to what anybody says. Keep looking for solutions and be hopeful.”