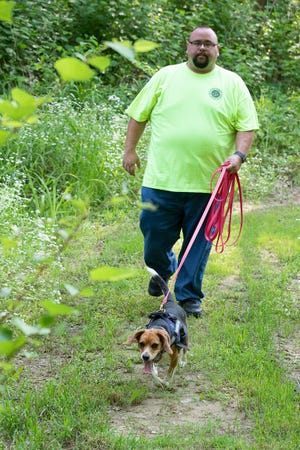 LONDONDERRY – To make a good search and rescue dog, a K-9 must be friendly, and very reward-driven.

Ault has been training and working with search dogs for eight to nine years, she said, working with the East Ohio Rescue Association.

Others in the group, such as Andy Edler, member and handler of a beagle named Molly, were inspired by seeing what Ault did.

“She saw the need in Ross County and there were some of us that were inspired by her to do it as well,” said Edler.

The approximately 2-and-a-half-year-old organization is dedicated to finding missing persons in Ross County and the surrounding counties, ranging as far as Columbus and even once to the Butler County seat of Hamilton.

While other locales outside of Ross County may have their own teams, Ross County Search and Rescue is still often called in to provide assistance for a number of reasons, said Ault.

“These dogs are not infallible, they make mistakes just like us. The handler could also be off that day- if the handler is off, the dog is off. So they call us in to corroborate what they’re doing,” she said.

Each dog is trained in one of four disciplines- tracking, trailing, air scent and human remains.

Air scent dogs are let off the lead after being given a scent article to sniff and track that scent on the air.

Trailing dogs are on their lead, sniffing the scent on the ground. Tracking dogs, meanwhile, will follow the tracks of a target footstep for footstep.

When the three varieties of live find dogs don’t turn anything up, human remains dogs will be put on the scent. These dogs are trained to sniff for the scent of decay.

Training for the dogs in the program begins ideally when the dogs are about a year old.

“That way they’re done with all the dumb puppy stuff – like jumping on the table,” said Ault, pausing briefly to pet the 8-month-old border collie, Panda, who had done just that. “Their attention span is there, and the ability to retain is there. When they’re a puppy, they might learn to sit and you come back two weeks later, they can’t do it. They don’t start really learning and memorizing until about 20 weeks at least.”

To successfully train a dog, you must find first what the dog is most driven by, said Edler.  Molly, for example, is most driven by being rewarded with a ball, although for some other dogs, this may be food or even simply praise.

The handler will then start introducing scent, taking a scent article from a target and commanding them to find the scent starting at a very short distance.

“You start your dog out on little short ‘runaways,'” said Edler. “It might be five feet away. You give your dog a word, for mine, when she starts searching, you say “find it.” She’ll watch them walk away at first too. Then you take her up to them and you give her her reward. Later on, you take them further and further and you work in an alert.”

When Molly was certified, she had to find a scent a half-hour old, and determine between three different people which one was the target.

While summers are normally busier, the schedule is unpredictable by nature, said Ault.

“Some weeks we may have three, four calls within a few days, followed by long periods where we don’t get a single call,” she said.

Four of the seven dogs in the organization are rescues.

One of them, Liberty’s Baby, AKA “Baby” is in the second round of the 2021 American Humane Hero Dog Awards. Baby was found in the woods, surviving with two puppies by eating from a deer carcass. She was very thin, with ribs and spine showing, along with having a very heavy insect and parasite infestation. Once rescued and recovered, Baby began showing promise as a search dog.

After lots of hard work and training, Baby passed her human remains detection test through the National Association for Search and Rescue, becoming a certified cadaver dog.

You can vote for Baby at herodogawards.com under search and rescue dogs.