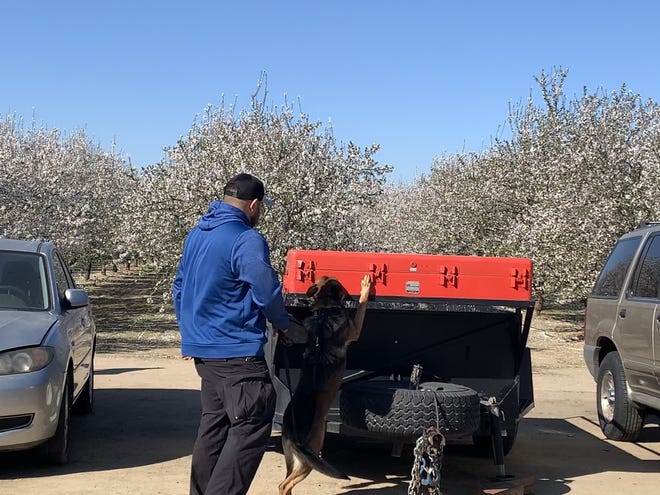 Crystal and powder meth, cocaine, and heroin are some of the drugs that the San Joaquin County Sheriff’s Office patrol K-9s will soon be able to detect after they complete a drug detection training program.

“Having a dual purpose dog is making the officers’ jobs more efficient and is safer for the community at the same time,” Sheriff’s Office spokeswoman Deputy Sandra Mendez said. “We look forward to having our deputies be up to par with other departments. Many other departments already have their dogs being used as dual purpose. It is just much safer and smarter for the department to have this type of help.”

The patrol K-9s are currently being trained at the Top Dog Police K-9 training center in Ripon.

Mendez said this is new to the San Joaquin County Sheriff’s Office and it’s all happening because of Sheriff Patrick Withrow. “We have a new sheriff and our sheriff is in for change.”

Though the training is usually eight weeks, the K-9s will take three weeks of detecting training and will be certified Thursday. The police dogs were required to train for 10 hours a day, four days a week for three weeks to complete their certification. They also will continue monthly maintenance training to keep up their work.

The training consists of multiple exercises. Starting with a box with a tennis ball inside of it, they are presented with a “hot box” containing odors inside. The police dogs sniff the box several times and once they show a response, the tennis ball inside is popped out of the box.

The dog will also be presented with a “cold box” that will not have an odor inside of it. They learn how to tell the the boxes apart. They are rewarded when they select the one with odor.

They also are trained along a wall with holes, where the same idea is used. The dogs will be searching for the hole on the wall with odor.

Searching vehicles for odors is another exercise that makes up part of their training.

“A lot of the times the dog will conduct just a sniff of the exterior of the car and tell you if there’s actually narcotics in that car, on that vehicle,” said Ron Cloward, manager and trainer at Top Dog and a retired lieutenant with the Modesto Police Department.

In the center’s basement they have a long hallway with multiple doors that lead to small rooms that are furnished and set up in different ways where the dogs will search and sniff the room looking for those hidden odors.

Even though they are about to be certified, these police dogs are already helping officers with arrests. One police dog is said to be getting trained in guns and ammunition.

“I think the greatest message that I would say about police dogs is they are not vicious animals and that’s what a lot of people would say, they think they are very vicious, but I will tell you that I don’t want anything to do with a dog that I couldn’t walk into a classroom full of kindergartners,” Cloward said.

Record reporter Angelaydet Rocha covers breaking news. She can be reached at [email protected] or on Twitter @ AngelaydetRocha. Support local news, subscribe to The Stockton Record at https://www.recordnet.com/subscribenow.

A Rare Economic Bright Spot in the U.S. Health System: The Vet’s Office

A Rare Economic Bright Spot in the U.S. Health System: The Vet’s Office