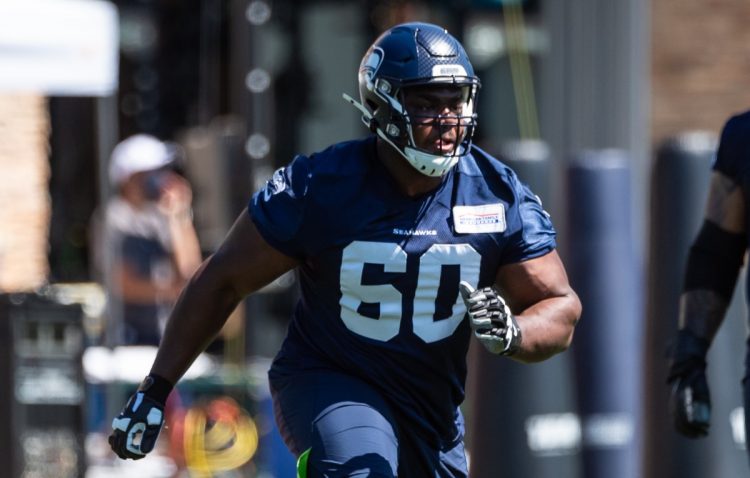 RENTON, WA – When the Seahawks used their fourth round selection in the 2019 NFL Draft on Wake Forest guard Phil Haynes, the organization believed the powerful 322-pound mauler would have a chance to compete for playing time against veterans D.J. Fluker and Mike Iupati right away.

Upon his arrival in the Pacific Northwest, Haynes got off to a promising start, receiving work with the first team offensive line at left guard during Seattle’s offseason program. Making a strong impression in his first several practices, he drew praise from All-Pro left tackle Duane Brown, who called him a “pleasant surprise.”

“He’s a big, strong guy. He’s catching on pretty quickly. He’s got a great demeanor,” Brown said. “A lot of times, this kind of atmosphere can be overwhelming, being given so much information, the speed right now, you’re not used to practicing without pads on so fast and everything’s happening so quickly, but he’s handling everything well.”

At the time, Haynes appeared to be on the fast track to finding his way into the Seahawks starting lineup. Even with Iupati joining the team, given his age and lengthy injury history, the rising rookie was expected to push him for snaps and looked like a perfect fit for the team’s offensive scheme.

Unfortunately, Haynes underwent sports hernia surgery shortly before the start of camp and landed on the PUP list. It would wind up being the first of multiple injuries that would dog the North Carolina native in his first two NFL seasons, limiting him to two regular season games, two playoff games, and a combined 43 offensive snaps during that span.

“It’s been really tough. Just every year having to deal with something, something major. It’s not fun,” Haynes reflected.

Last August, Haynes hoped to have his injury woes behind him. With Iupati returning on another one-year deal, the left guard spot remained open for the taking if he could come back healthy. But a nagging hip issue kept him out most of camp and landed him on injured reserve to open the season. After being activated, he dressed for two games before a groin issue put him back on injured reserve and ended his season.

Following another lost year ruined by injuries, Haynes underwent another surgery during the offseason and reported to his third training camp in outstanding shape. After not being able to see him much the past two seasons, a healthy, nimbler Haynes has looked much like the player coach Pete Carroll and general manager John Schneider envisioned him becoming when they drafted him.

“He had something that had been bothering him for quite some time.” Carroll said last Friday. “The docs figured it out, they cleaned something up and he’s been better. He moves better, he’s been more flexible, he’s taking advantage of the great strength that he has. There was a certain stiffness that he was dealing with because he had a problem. He had bone shaved and it really made a difference and he’s done really well.”

Unlike Haynes’ first two seasons, the Seahawks have clear starters at both guard spots with Lewis sliding over to the left side after a fantastic rookie season and veteran Gabe Jackson arriving to bolster pass protection on the right side. Those two players will be in the starting lineup in Week 1 with no questions asked, creating road blocks for the third-year lineman to see the field beyond special teams.

But after being relegated to the sidelines and watching his teammates play from home last year, Haynes is simply grateful to be playing again and for the chance to prove himself. As a long-time admirer of Jackson, rather than be bitter about his arrival squashing a chance to potentially battle for a starting job, he has eagerly been absorbing as much information from the eight-year veteran as possible on the field and during team meetings as well as film sessions.

“It’s been unbelievable. I’ve been a fan of his since I’ve been playing football. I’ve been watching him for years and years now. When I saw we traded for him, I was so excited because I get to learn from him and pretty similar body type and just excited to learn everything from him.”

Putting all the “nuances” of run blocking and pass blocking learned from Jackson into action, including tips on hand placement, Haynes has bounced back nicely from his injuries to turn in a stellar training camp. Along with seeing snaps with the first-team offense spelling his idol at right guard during practice, he also started in both of the Seahawks preseason games, allowing a single pressure on 43 pass protection snaps in losses to the Raiders and Broncos.

For Haynes, who only played one year of high school football before enrolling at Wake Forest, he believes his success protecting the quarterback stems largely from his prior background as a standout basketball player at North Raleigh Christian Academy.

“If somebody in basketball hits you with a nice crossover, you got to be able to redirect and it’s same thing in pass pro,” Haynes remarked. “When someone tries to cross your face or tries to knock off that outside hand or something like that, you have to be able to redirect. But it can be a little more physical, so it’s nice.”

Much to the delight of Carroll, a staunch advocate of multi-sport athletes, Haynes’ hardwood experience also has manifested itself in the run game, particularly on zone blocking schemes requiring lateral movement and quickness. As he described, his surprising athleticism at 320-plus pounds allows him to be able to execute key backside and frontside blocks on those concepts.

“You have a pod when you’re blocking in zones,” Haynes explained. “And you have to stay with your pod and be able to make sure you help your teammates because if the linebacker goes the opposite way, you can build a wall and make a cutback for the running back.”

While Carroll indicated Haynes would only be used in an emergency situation at center if needed, he also began learning the pivot spot to add versatility to his game while working his way back from injuries a year ago. Before practice, he can be seen snapping to Seattle’s quarterbacks, which he admitted has been the “hardest part” of adjusting to the position.

But on the flip side, although his snapping skills are still very much a work in progress with no previous experience as a center at any level, communicating line calls has been a major asset for him back at his natural guard spot.

“It definitely helps a lot just being able to get an extra set of eyes and pointing to ID somebody that I can help out a little bit on,” Haynes stated. “It just helps our general understanding of offense too and where to look, you kind of know what to do to help out the center. So it’s been good.”

With less than three weeks until the season opener, Haynes looks to be in excellent position to earn a spot on Seattle’s 53-man roster as the main backup behind Jackson. Although a starting role isn’t in the cards at the moment, he’s still only 25 years old and despite what Carroll said on Friday, if Kyle Fuller or Ethan Pocic can’t get the job done at center, the Seahawks may need to revisit the possibility of giving him a chance there or even sliding Lewis over and plugging him in at left guard.

In either scenario, with his durability frustrations hopefully now behind him and a tutor in the form of Jackson more than happy to take him under his wing, Haynes finally has a chance to get his career off and running and will be ready when duty calls at any of three interior line spots.