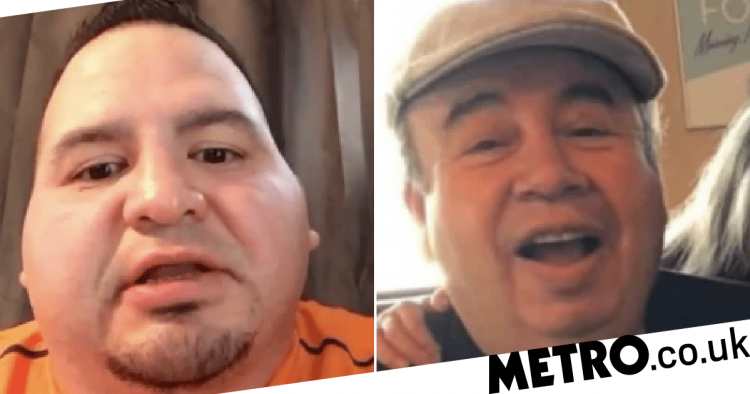 A grieving son who shared jokes and memes about coronavirus has warned others to take it seriously after his dad died of Covid-19.

Myke Rivera was keen to share his cautionary tale after his father Dan Vigil died of complications related to Covid-19 at a hospital in Lafayette, Colorado, on Sunday.

Rivera said: ‘You know, I was one of the ones who downplayed it and thought it was funny, reading the memes and making jokes about it…

‘You know, it hits you right in the face, how quickly it happens.’

To view this video please enable JavaScript, and consider upgrading to a web
browser that
supports HTML5
video

Vigil began experiencing coronavirus symptoms about a week and a half ago, and was rushed by ambulance to an emergency room, where his condition deteriorated rapidly.

Rivera explained: ‘Basically, they had to put him into a coma.’

He and his mother April were stunned at the speed of Vigil’s decline, with April forced to quarantine over fears she may also have contracted the virus.

She was forced to remain in isolation after deciding to take her husband off life support, and was unable to say a final goodbye before Vigil’s death.

Rivera said the shocking and sudden loss of his dad has hit his family hard, and that he is unable to comfort his mother properly while she remains in quarantine.

‘You know, I (get) to chat with my mom through a window. How do you take that and how do you talk about that with your mom when you can’t even be face-to-face with her, over the phone or on text, the conversations?

Rivera has now urged others to follow guidance to self-isolate in a bid to avoid spreading coronavirus further.

Over 75,000 people in the United States have now been diagnosed with the virus, with 1,081 dead as of Thursday afternoon.

Colorado has seen 1,066 coronavirus cases, with 20 people – including Vigil – losing their lives to Covid-19.

Get your need-to-know
latest news, feel-good stories, analysis and more