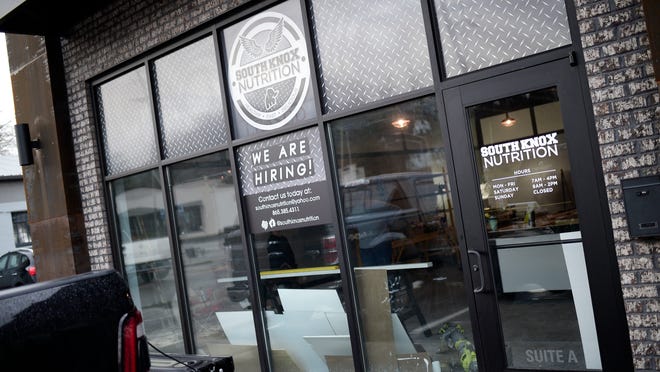 The people behind South Knox Nutrition already feel like part of the Sevier Avenue family, but their role will soon become official once they begin offering energy teas and meal-replacement shakes in an area of town already focused on fitness.

The business, which is still under construction, will be located across the street from Alliance Brewing Company and Simpl.

Owner Michelle Able said similar nutrition shops are located in Knoxville, but each one is independently owned and given creative freedom to design the space.

“We came up with our own concept,” she told Knox News. “You don’t have to follow a certain color scheme or anything like that. Obviously, down here, we want to be more industrial.”

Able believes the business will fit perfectly in South Knoxville when the doors open by the end of the month.

“We want to help this area grow,” she said.

Jason Able, Michelle’s partner in life and the business, believes South Knoxville is “the most emerging part of Knoxville right now.”

That’s part of the reason the married couple landed on the Sevier Avenue spot, which happens to be next to a yoga studio.

“For us, what we saw just coming down here and hanging out, people are always walking their dogs,” Michelle said. “They are running constantly, they are riding their bikes. It doesn’t matter what the temperature is.”

Michelle has a passion for fitness, herself, and believes the beverages South Knox Nutrition provides will be beneficial to anyone looking for a sweet, healthy treat.

People may already be familiar with the offerings, though, as some other Knoxville shops using “nutrition” in the name have the same menu items.

“It’s not a chain; it’s not really a franchise,” Michelle said. “They call it a club. Everybody is individually owned.”

One thing the businesses have in common, according to their websites, is the source for ingredients. A tab on the websites directs visitors to Herbalife, which has faced controversy over the years for claims of operating a pyramid scheme.

A Federal Trade Commission investigation resulted in Herbalife paying $200 million in consumer relief in 2016 and overhauling its business practices as part of a settlement to avoid being charged and shut down.

Able assured Knox News that products will be sold individually, with prices clearly listed on the wall. Guests will not be asked to join any type of club, as her focus is on providing quality products to customers, she said.

Packed with flavor, not calories

The flavors of shakes range from fruity, like strawberry lemonade and banana pudding, to chocolate and vanilla-based flavors that include pecan pie and oatmeal cookie.

The energy teas are like energy drinks that actually taste good, Jason said, and all of the products have nutritional value.

The classic shakes have between 200 and 250 calories, according to the website, with between 24 and 27 grams of plant-based protein. The black, green and oolong teas provide natural energy, while using ginseng and guarana “for focus and mental alertness,” the site says.

Jason and Michelle plan on offering pup cups, as well as drinks for the kids. But don’t worry: Those won’t be caffeinated. They just help the little ones feel like they are drinking the same thing as mom and dad, Michelle said.

The shakes will be prepped, so the process should be quick once people walk through the door.

Drinks can be customized to fit preferences and dietary needs. The shakes are water based, and there are multiple keto-friendly and gluten-free options.

Handheld devices will allow workers to take curbside orders for people who don’t feel comfortable coming inside due to COVID-19.

Proud of the work being done

There will be a seating area inside the roughly 1,400-square-foot space, which the couple admits is probably twice the size they need.

They feel plans to add internet and a TV should make South Knox Nutrition a great place to hang out and get some work done.

“Literally, I’ve hired an electrician and a plumber,” Jason said. “The thing that I love is, looking around in here, we did all this. We didn’t hire somebody to do all this. We did it.”

However, the couple will be looking to hire some people to work at the shop. While South Knox Nutrition is Michelle’s “baby,” Jason will be returning to his day job once it’s up and running.

With planned hours of 7 a.m. to 4 p.m. Monday through Friday and 9 a.m. to 2 p.m. Saturdays, Jason feels the shop could be the perfect fit for college students looking for part-time work.

Michelle said she hopes to hire at least one full-time staff member.

Another thing some Knoxville nutrition shops have in common is the elephant logo honoring Ella, the daughter of Bearden Nutrition owners Jason and Leslie Armstrong. Ella died at just 8 years old in 2015 due to an undetected heart condition.

In addition to the elephant, Jason and Michelle have added wings to their logo to honor people they have lost.

“We really wanted to honor (them) because those people helped us grow into the people we are,” Michelle said. “And they’re looking over us.”

The couple plans to add a photo wall with wings inside the business for people to pose in front of with their drinks.

“We’re committed, and we think it’s a good concept,” she said. “And we believe we’re in the right place.”

Barking dog alerts woman to trailer fire near Redmond, makes it out with infant