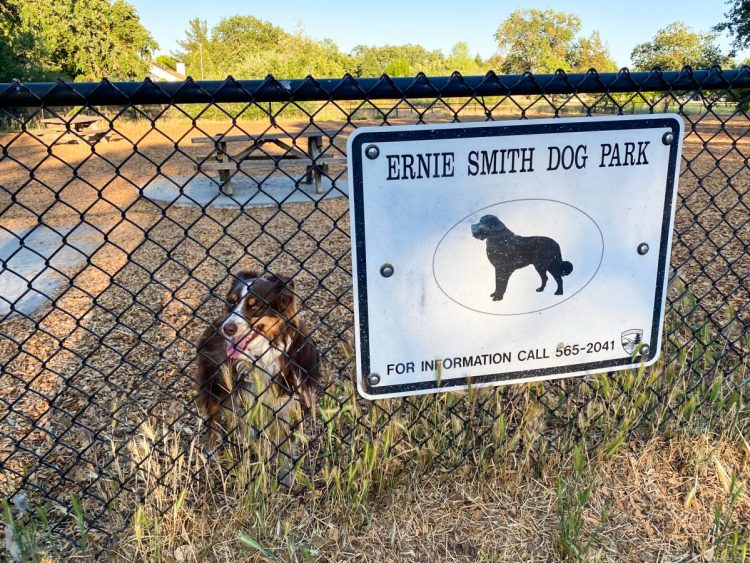 Ernie Smith Park may be small, but it sports a mighty number of amenities on its oddly shaped patch of land. There is an expansive, level, grassy athletic field with a baseball diamond and a popular asphalt basketball court next to an elaborate play structure for the kiddies. The long “tail” of the park is a blacktop trail, suitable for a brisk hike, that winds all the way to Railroad Avenue past some impressive specimens of California native oaks

Probably the park’s most-used feature is a fully fenced dog play area where pups can romp and socialize. A few years ago the dog park’s increasingly scruffy, water-hungry turf was replaced by a thick layer of wood chips, so dogs don’t even get muddy after it rains.

There are picnic tables in the dog park, but no sane person would try to enjoy a meal there. You can instead head to a group of picnic tables that are about in the middle of the park near a small seasonal stream. Although be aware that there is no shade in that spot in the afternoon and the tables are on concrete pads, so in warmer weather it may make more sense to go elsewhere.

The park was named after pioneering Bay Area radio sportscaster Ernie Smith, well known in the 1920s through the 1950s, so it’s appropriate that it offers so many team sports opportunities. And although there is nowhere in the park that you are not within sight of private homes or the sound of traffic from Arnold Drive, there is even a good chance for bird watching. A small, protected wetland area near the dog park hosts a variety of wildlife, including herons, egrets and hawks. In recent years a pair of mallards has raised their brood there. In March and April the distinctive call of the nesting redwing blackbirds from the reeds is the sound of spring itself.