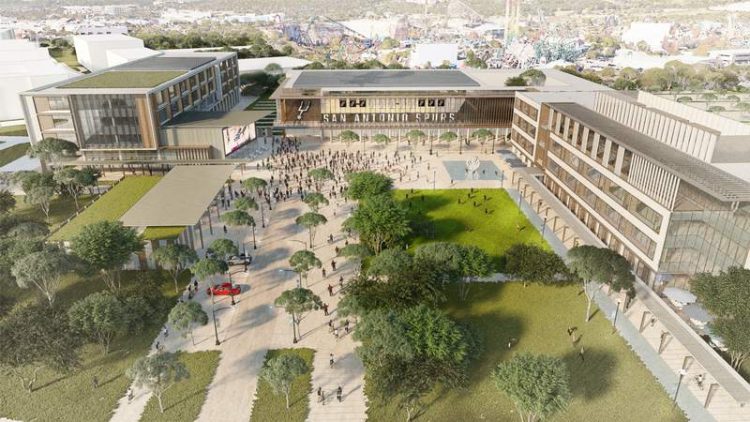 Editor’s note: Get the latest team news and videos by subscribing to KSAT’s free Spurs Newsletter.

Spurs Sports and Entertainment publicly unveiled plans today for a new nearly 50-acre development on the far Northwest Side that includes a state-of-the-art training facility for the San Antonio Spurs, medical and research offices, retail, park and community space.

The development is called the Human Performance Campus and it will be located off Loop 1604 and Interstate 10 near the Shops at La Cantera and Six Flags Fiesta Texas.

It also includes the Spurs Performance Center, which will be the team’s new training facility that is expected to be one of the top athletic centers in all professional sports. The Spurs current training facility is located off Huebner Road.

In total, the campus will be more than 504,000 square feet with the total cost of the project an estimated $510.8 million, according to the presentation made Tuesday at commissioner’s court.

The site is expected to employ more than 1,700 full-time employees, with the expectation it will be used 365 days a year for community gatherings and events.

Spurs officials tell KSAT the project will be primarily funded by private investors. The development is expected to break ground this October.

Spurs Sports and Entertainment released the following statement on behalf of Buford to KSAT:

“The Human Performance Campus is an exciting part of our collective future – for our city, our community and Spurs Sports & Entertainment,” said Spurs Sports & Entertainment CEO RC Buford. “Over the last five decades, San Antonio and the Spurs have developed and grown together in amazing ways. We believe this project continues that tradition and will have an impact locally, regionally and nationally.”

SSE executives appeared at commissioner’s court to seek approval for a $15 million project contribution from the county, which has since been approved. In exchange, the county will receive a 22-acre park which will serve as a hub for outdoor activities throughout the year.

The Park at La Cantera will expand walking and bicycling trails, and connect green spaces. It is also expected to have the largest dog park in Bexar County.

Bobby Perez, Executive Vice President General Counsel of SSE, was asked if this investment means the Spurs are committed to remaining in San Antonio for the future.

“This is our collaborative vision over many months and many years,” said Perez. “This location becomes our home and our place that we are putting our flag in the ground for decades. With this support, we believe that answers this question.”

Below is a copy of Human Performance Campus project presented to the Bexar County Commissioner’s Court on Tuesday and more renderings of the development: