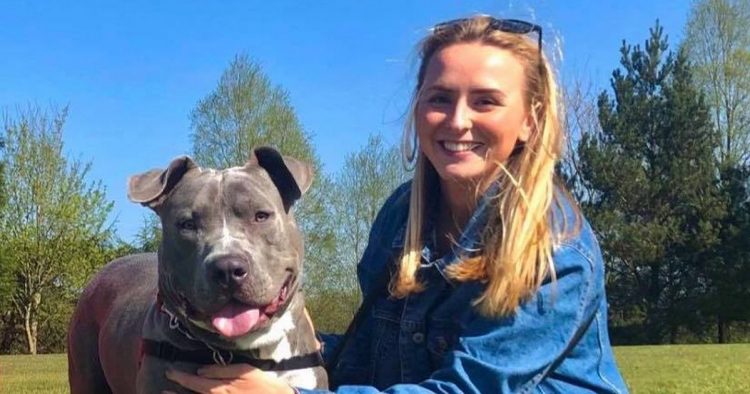 A former SSPCA employee is calling for the Dangerous Dog Act to be repealed after years of watching dogs being euthanised because of their breed.

The legislation forces kennels to put down any Japanese Tosa, Dogo Argentino and Fila Brasileiro or American pit bull that it comes across regardless of the animal’s temperament or suitability for adoption.

The bill came into force on August 12, 1991, but the SSPCA charity says it is “not fit for purpose” and says parts should be scrapped so dogs are judged on “deeds not breeds”, meaning dogs would be put down only if they had attacked someone.

Heather Anderson, 26, currently works for a charity called Give A Dog A Bone which helps tackle loneliness in older adults and supports rescue animals.

After years of working with animals, she is adding her voice to the calls to end ‘breed-specific legislation’ which she describes as “extremely unfair and outdated”.

Heather added: “I think there’s a massive stigma surrounding these banned breeds because many people think there is an association with a certain type of person who would own them. A lot of the wrong people do unfortunately choose these types of dogs buts it’s all in partnership with the ‘dangerous’ and ‘scary’ picture that has been painted because of this rhetoric.

“I don’t agree it ever actually had a place in society, but especially not now” she continued.

“The fact it has reached a 30 year milestone is appalling, especially considering it’s been proven that it hasn’t helped reduce dog bites during its time of existence.

“There’s a massive injustice surrounding this legislation which sought out to protect public safety at the expense of innocent animals and the families who they belong to.”

Heather, who is from Airdrie but lives in Tradeston, worked with the SSPCA for two years and recalls two “hard-hitting personal experiences” during her time there.

She said: “My first day, I was introduced to a typed pitbull dog and was told of the fate that awaited her.

“She was part of a court case and belonged to someone who had been linked to some pretty awful stuff, so she never had a chance of making it out alive. She wasn’t even two years old and had fit the measurements of a ‘pitbull type’ something that still baffles me to this day. An animal’s fate being decided purely because of how they look and what specific measurements they meet.”

But the discrimination against the dogs doesn’t just start on the vet table – even in the kennels, dogs deemed to be dangerous under their personal characteristics are segregated from other dogs and staff, fed and walked at different times, and not allowed to be considered for adoption.

“She was nervous but never in a way that made me or any other member of staff worry. She was in a scary and new environment and still didn’t act out. She loved fetch more than anything and would’ve happily retrieved that ball for hours if you’d let her.

“We had outdoor runs at this point and if you were passing by a run she was in, she’d post the ball through the gap in the hopes you’d throw it for her. A dog sentenced to death who just loved playing fetch. She spent the last 3 months of her life in kennels before she was put to sleep.

“The first dog I ever actually sat with whilst being euthanised, so it’s something that will never leave me. She went peacefully with not even a slight bit of struggle, surrounded by my whole team who adored her and wished for a totally different outcome for her.”

Heather also talks about an experience of breed-specific discrimination with her own foster dog’s litter mates, which were a result of poor breeding and being taken away from their mother too early.

“I worked with them from pretty much the day they were seized from their owner at only 6 months old and watched them grow into young adults” said Heather.

Get all the latest Glasgow news and headlines sent straight to your inbox twice a day by signing up to our free newsletter.

From breaking news to the latest on the coronavirus crisis in Scotland, we”ll have you covered.

The morning newsletter arrives every day before 9am and the evening newsletter, manually curated by the team, is sent between 4pm and 5pm, giving you a round up of the most important stories we’ve covered that day.

To sign up, simply enter your email address into this link here.

“Sadly, my foster dog had to be put to sleep shortly after his 1st birthday due to health issues which were caused by the traumatic start they had in life. His four remaining sisters came under fire for their appearance and a specialist was called out to measure them all up.

“One of four was very nearly on the cusp of being typed as a pitbull, and only after 3 visits with advice from another specialist was she given the all clear. I was told the only thing that saved her was the size of her paws.

“This shows just how crazy this legislation is. A litter of dogs who share the same parents, the same DNA and still one of them can fall victim to this because they look bit different from their siblings. Pitbull is a type. It’s not an actual thing. It’s something that’s been conjured up to fit these measurements that are used.”

Heather believes that each dog should be based on its individual character.

“Any dog has the ability to bite but not all dogs will” she said.

“I would urge people to see the bigger picture here and open their eyes to the fact that these banned breeds are not the only dogs that bite.

“I think the important saying that is being campaigned and highlighted surrounding BSL is ‘Deed NOT Breed’. I always imagine the outrage people would feel and the backlash that would ensue if Labrador’s, a breed that’s very well known as being a great family dog, was to find itself on a banned breed list.”