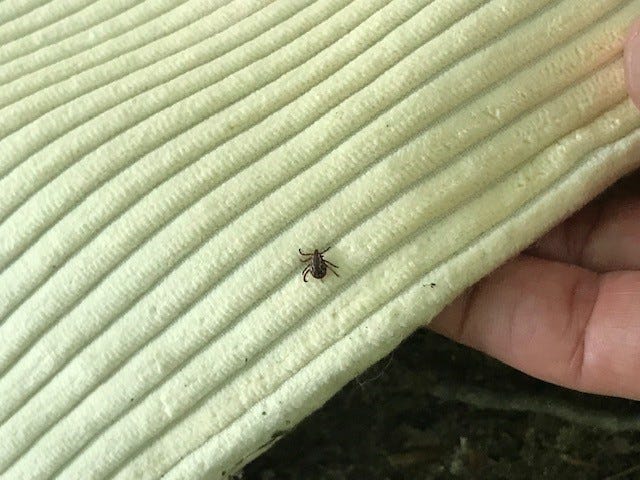 
They’re lurking on the side of the trail, on a blade of grass, on the edge of a leaf, waiting for their next meal.

They’re ticks, and that meal could be the next human or dog that brushes by them.

Although it recently snowed, there will only be a couple cold days and that won’t have an impact on some adult ticks that are already “questing” or looking for hosts.

There are over 20 known tick species in Michigan. Most often, they survive by feeding on wildlife, but several species are known to bite people and pets and may harbor dangerous bacteria, viruses or parasites, according to the Michigan Department of Health and Human Services.

The most common Michigan species are the American dog tick and the deer tick, also known as the blacklegged tick, which is the species that carries Lyme disease.

Lyme disease, which if left untreated can spread to joints, the heart and the nervous system.

When American dog ticks are active depends on how quickly it warms up in the spring, but it’s generally from May to August or September, he said.

Blacklegged ticks, on the other hand, are adults during the winter and can be active during warm days. Russell said he’s picked adult ticks off his dogs in January.

Faust, a health educator and certified environmental specialist at St. Clair County Health Department, said the American dog tick is the most common specimen in the county and so far there haven’t been any reports of blacklegged ticks.

However, blacklegged ticks have been moving eastward in the state over the years and if the trend continues, they could come to St. Clair County.

“And that’s why it’s important to continue to monitor them,” she said.

For monitoring, the health department hires seasonal staff and trains volunteers to do “tick drags,” where they take a big white cloth and drag it behind them in local parks and on the edge of trails, where ticks are waiting.

Ticks fall on this cloth and the staff and volunteers can spot them and put them in specimen jars, with gender and species recorded. This monitoring helps determine if the tick population is growing and what the disease potential is, Faust said.

Prevention and what to do if you find a tick

People who are looking to avoid ticks should stay in the middle of trails and away from tall grass where ticks lurk, Faust said.

Faust people should check under their arms, between fingers or toes, the head, scalp and behind the ears for ticks.

“They’ll attach pretty much anywhere they can,” Russell said.

He also said people should keep the amount of brush in their yards down, as it will remove shaded habitat ticks like.

Russell said if someone finds a tick bite and it’s been there for some time, they should be on the lookout for headaches, fever and muscle aches as those can be tick-borne disease indicators.

It takes up to 48 hours for the Lyme disease pathogen to move from the tick into its host’s wound, which is why tick inspections are so important to reduce the risk, he said.

If someone is nervous the tick they found might carry a disease, they should keep the tick alive so it can be tested by the local health department or state lab, Faust said.

People wishing for a local park to be monitored or with tick questions can call the St. Clair County Health Department at 810-987-5306. People can email tick photos to Russell for identification at bugman@msu.edu.