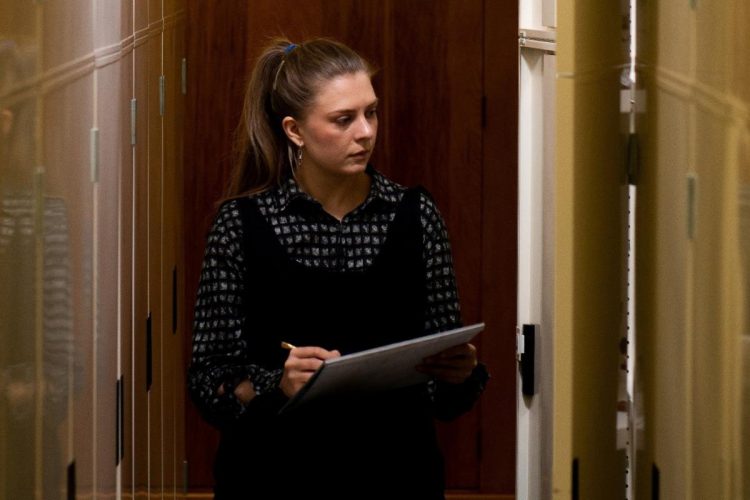 Once widespread in New Zealand, kaki are now the world’s rarest wading bird and are continuing to  tread a thin line with extinction. Emma Burns reports.

A long skinny-legged model lays in perfect stillness holding artist Madison Kelly’s gaze as she tracks its lines and shadows. It won’t move: it’s a taxidermy bird, a kaki, from the Otago Museum’s collection.

Once wide spread in New Zealand, kaki are now the world’s rarest wading bird. In 1981, the population dropped to just 23 individuals. Today, despite population gains to 169 individuals*, they are still treading a thin tight rope with extinction.

Kelly visits the museum researcher room each week and the drawing time is spent attending to the exact details of each kaki.

“The manu hold with them a history of their species, as well as a history of human actions and narratives — whether this be in their deaths, the collection of their bodies, their cataloguing, or their mounting. As this project continues, the narrative may also include their relationship as drawings with people outside of the museum space. With this in mind, the drawings are slow, specific, and careful, in an effort to best record the traces of these interactions.”

Focused on kaki, Kelly’s works hope to raise their profile and their plight. As an early career graduate of the Dunedin School of Art, her practice regularly involves inter-disciplinary collaboration with scientists. Inserting an “A”, for art, into the STEM fields, to ensure that creativity is recognised as key in problem solving, critical thinking and communication.

The project she is working on at the museum is a continuation of her residency at Te Matatiki Toi Ora/Art Centre Christchurch, researching past and present ecosystems in Canterbury. It focuses on kaki as taoka species that can bring attention to the wider issue of river habitat and biodiversity losses in recent history, but encompasses the relationships of river species and systems as a whole.

Kelly works with researchers from the University of Canterbury, the Kaki Recovery Programme and Otago Museum. Like the living population, the number of kaki in the museum’s collection is small: just four birds have been preserved as skins — two in behaviour posed taxidermy mounts and two laid out as study skins. They were collected in the late 19th century from Lake Benmore and the Shag Valley.

One of the last remaining areas kaki are found (anywhere) is Te Manahuna, Mackenzie Country, where Kelly has spent time watching and drawing kaki.

To Kelly, the museum kaki represent a group of individuals who are no longer thriving in Aotearoa.

“My time observing and drawing live kaki in Canterbury offered an opportunity to record the nature of intensively managed species, borne out of our recent relationships to the land. Observing members of the same population from the 1800s provides a different insight — an intersection with the past, and a chance to think intensely upon both the ‘wild’ and ‘institutional’ life of one specific manu at a time.”

Breeding as monogamous pairs, kaki establish a territory within a wider area with suitable breeding grounds. In September and October, they lay a clutch of 3-6 eggs in a small vegetation-lined nest constructed in shallow divots in the ground. The chicks are precocial, meaning they are up-and-about and able to feed themselves almost immediately after hatching. They fledge (develop their flight feathers) at around 6 weeks, but remain with their parents a further 6-8 months.

Predation of adult birds and eggs by introduced mustelids and rodents pose the greatest risk to kaki survival. To prevent predation of eggs and sitting parents, the eggs of captive kaki and wild kaki are collected and hatched in artificial incubators. The bulk of the Otago Museum’s kaki egg shell collection were saved and lodged in the museum after the 2005 breeding season by the Department of Conservation.

When the number of birds in a population get as low as 23 individuals, conservation management gets very intensive, it has to if the goal is averting extinction. Many species of New Zealand’s birds have already been lost. Specimens preserved in museums and illustrations by artists are often all that remains. Kaki came close. They still are.

This creates a sombre vibe of foreboding, not lost on Kelly or I, what nearly was and still could be … But we use that to fuel the goal to raise awareness about the plight and profile of the kaki.

Get to know the species

Be a responsible dog owner, only take them to areas where dogs are allowed