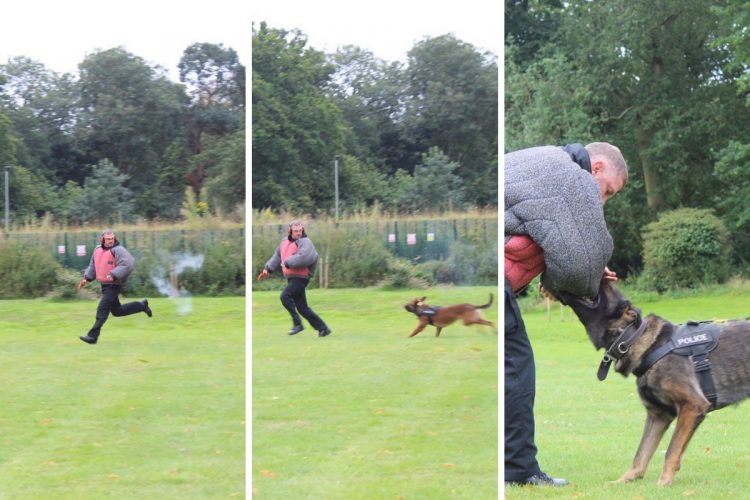 A Springer Spaniel named after the Norse god – and Marvel Avenger – Loki sniffed out a voyeur’s hidden camera watch.

The English Springer, one of four ‘data dogs’ in Thames Valley Police’s armoury, was said to have pointed out a watch to his handler. The wristwatch was later found to contain a hidden camera.

The specially-trained dogs are so prized they’re used by forces all over the country, officers said.

Across the Thames Valley and Hampshire, there are more than three dozen police dogs – each living with their handlers.

Three were showed off to members of the press at the force’s training college in Sulhamstead, near Reading, on Thursday– chasing down a ‘crook’ armed with a starter pistol, hunting for another ‘suspect’ hiding in bushes and searching for items in the grass.

And anyone can help look after a puppy police dog in training, with members of the public able to apply to become ‘puppy walkers’.

This week, the latest group of prospective police dogs left for their foster homes. The dogs, who are named by their foster carers, will receive training from the Thames Valley dog instructors in their first months before they’re assessed to see if they’re suitable to become fully-licensed police dogs, used for anything from policing football crowds to finding missing children.

Daz Stacey, one of the dog trainers at Sulhamstead, said puppy walkers got a ‘massive sense of achievement’ from fostering the dogs.

“We take people ideally local to the Sulhamstead area so we can have them in and monitor them throughout their progress,” he told the Oxford Mail.

“You come in, we’ll have a brief chat about what it entails because it’s quite a big commitment.

“You’ll need to be vetted as well and we’ll come and have a look at your house to make sure it’s suitable.

“If that’s all good you’ll get added to the list and when a puppy comes available you could be lucky enough to become a puppy walker.”

He added: “It’s lovely having a dog from a real small age – a bundle of fluff, if you like, at eight weeks – then seeing the progression as they get older, the training we put them through then hopefully ultimately their success of going off to a handler, licensing and being out there as a police dog with a handler and seeing their first successes of finding people and helping people safe.”

This week, handlers showed off the astonishing capabilities of the general purpose dogs, a mixture of German and Belgian Shepherd breeds.

Chasing down an ‘armed’ suspect at Sulhampstead training college

Like their human handlers, the dogs are not immune to the dangers of the frontline.

Of the three animals showing off their skills, two – Viper and Hatch – have been attacked in the line of duty. Viper, a Belgian shepherd, was punched by a suspect – although, happily, he was uninjured. His handler said the force would look to take action against those who attacked the service animals. “I want to protect him,” he said.

For news updates straight to your inbox, sign up to our newsletter here.