The boy and his dog: Learn to create at art class | Lifestyle 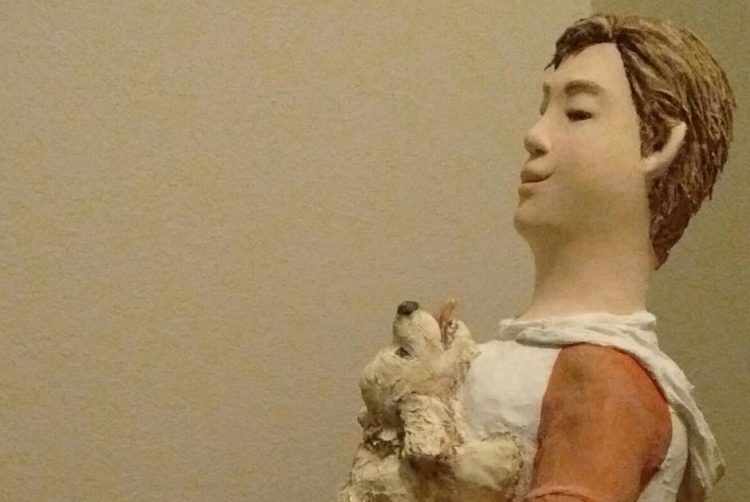 It started about eight years ago at the Treasure Trove’s open studio, where I stuck a half-gallon milk jug together with a plastic water bottle and some newspaper, and proceeded with the messy job of traditional paper mache.

Unfortunately, I had to stop going to open studio, and for a while, “the piece” languished on a shelf in the back of Treasure Trove. I eventually rescued it and took it home to languish on a shelf in my tiny office/studio.

One day, I took pity on its crumbling plastery face and coated it with glue to hold it together. I decided to try using air dry clay as a skin over the face and hands. A face emerged. It was my brother’s face, and my brother loves puppy dogs. Suddenly, the piece made sense. I had been struggling with the character and composition, and working around the awkward protrusions of the milk jug. Now, I could see a path forward. I could see the piece. Sometimes it takes a while for the world to come into focus.

When a persistent roof leak caused the ceiling in my tiny office/studio to collapse, I sat him on the kitchen table. I began to refer to “the piece” as “the boy.” He made me crack a smile whenever I came in the kitchen.

Unfortunately, I made him crack a smile right back. I accidentally knocked him off the table onto the floor, where he lay decapitated, and otherwise fractured. I scooped up the patient and applied the best first aid for head reattachment I could find — paper towel tourniquet and white glue. When it dried, I was surprised at how strong the bond was. I started using it all over “the boy” for repairs and modeling. This was turning out to be a really versatile medium, especially with the dog. I could roll it up, twist it, cut it, and use it like decopage. I started making small creatures using egg cartons for armature.

I thought that I had discovered something magical! Indeed I had … or at least until I tried to put a new clay skin over something renowned for its absorbency. The moisture in the clay was swelling the paper in my patchwork and leaving raised bumps under his skin. My boy had a bad case of acne. So, I tore off his face and redid it, using more clay.

I decided to use a primer-sealer on all the paper areas. That seemed to work well. The sealer made the paper towel water resistant and rock hard. The bonus was I could still cut it and shape it and sand it. Also, I could build more on top without fear of collapse. Cool! To unify the piece I tried to use sealer on the clay face. I somehow forgot that the sealer contained moisture. I had to tear off his face and redo it again! This time there was an extra layer of sealer to contend with in finishing.

Life is in the finishing, isn’t it? We are brash in our efforts to create things, but we need perseverance and patience, especially with ourselves, to finish what we start. Sometimes, it takes many steps and added layers to get there. Sometimes it takes years. Sometimes, we just throw on some paint and hope no one notices.

A short while back, I moved to Bear Valley to aggravate my mother on a full-time basis. During the move, “the boy” scraped his elbows and suffered some minor abrasions. Then, when he was safely settled, my oak walking stick fell on him and cracked not only his smile, but his little dog’s smile too. Repairs, rework, finishing … finishing … finishing.

So now, I am ready to apply a final sealer and I am petrified! But, that is what we do as artists when we try something new and unfamiliar. We face down our fears and dare to create, using what we’ve learned.

After eight years, we are ready, the boy, his dog and I, to share what we have learned together. But how can you share all that in one class? You can’t. So, I am breaking up a beginning workshop into a series of three classes. Mel, at the Treasure Trove has given me the following dates:

Let’s have some fun! The cost is $45 for the three-class series, payable to Treasure Trove.

SLIDESHOW: Funny memes of Bernie Sanders and his Inaugural mittens is the gift that keeps on giving