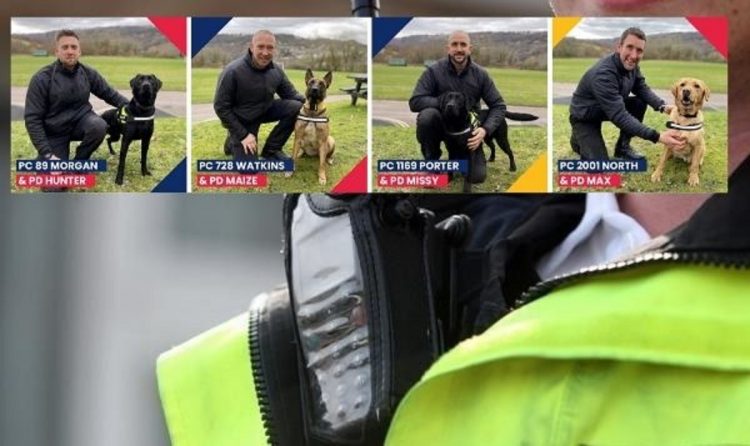 Three Labradors and one Belgian Malinois have started a rigorous eight-week training course in Pontypool, as Gwent Police’s dog section looks to bolster its ranks.

Find out how their training in #Pontypool is going. 👇 https://t.co/dAIiDEAUt4 pic.twitter.com/uUxCFGY0qe

The force recently ran a “recruitment” drive on social media and contacted a local rescue centre, All Creatures Great and Small, as they were on the lookout for “energetic, driven” dogs that could be permanently rehomed with the team.

Three Labradors – Hunter, Max and Missy – were donated to the team by the local rescue centre, while Maize – the new Malinois – came in privately.

The temperament of a police dog is vital, explained the team, and is something they look at during the selection process and subsequent initial training, where they learn more about the dogs’ motivation to play and their ability to use their sense of smell.

Police search dogs are required to remain composed and driven throughout various drills and exercises, as they can go on to work with their handlers to detect drugs, firearms and explosives during warrants.

Over the next month, Gwent Police’s experienced handlers will be able to determine whether the current trainee dogs are suitable for further training and an ongoing role in the team.

None come much more experienced than retired dog handler, Paul Booth, who’s returned to Gwent to lead the training.

“The new dogs are being trained over the course of six to eight weeks and will then be assessed and, hopefully, licensed at the end of the course. If successful, they’ll go on to join their handlers on shift.”

All police dogs live permanently with their handlers, and, before being licensed, are put through their paces during several training drills.

“The conditions of the search exercises vary,” said Mr Booth. “Drive to play and their natural inquisitiveness is important, so we start by getting them to search small, uncluttered rooms for items related to play – like tennis balls, for example.

“In the next stage, we place a drug/substance next to the ball, so they become accustomed to smells and what they need to search for, before eventually removing the ball so their search is focused solely on locating illegal substances. All the while, we use a clicker to indicate they’ve achieved their goal and to reinforce positive behaviour.

“As the weeks go by, we improve their skills by hiding substances at different elevations – not just at floor level, but on chairs, desks and shelving units – introduce them to different smells/substances, then include stimuli that could ‘interfere’ with the search, things like different noises, scents and weather conditions.

“This ensures that the dogs can perform effective searches across changeable environments and remain focused.”