The right dog for the road: Driver puts love, training into his passenger-seat pups 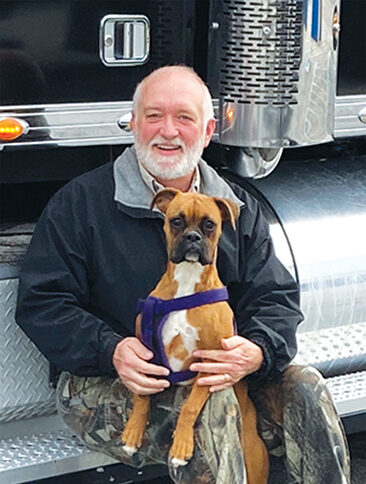 New York native Chris Potter, now based in South Carolina, has always been around canines. He grew up with dogs, trained them for military use while in the U.S. Air Force and has owned a string of dogs for companionship on the road, the latest of which is Nala, a German boxer.

If you doubt that there’s really such a thing as a dog whisperer, spend a little time around Potter and you’ll become a believer. His knack for training dogs has taught him a few things about how to select the right dog for the road — most of which, he said, is rooted in common sense.

“You just don’t put a dog in the truck that’s not housebroken. Housebreak them and teach them some good leash manners first. Also, introduce them to a lot of people. The more socialization they get, the better,” he said.

“There’s no magic formula to whether or not a dog is going to chew — you know, air lines, seat belts, chairs, beds,” he continued. “Give them a toy; tell them what’s allowed to be chewed and what’s not allowed to be chewed. That also needs to be done at the house, before you get in the truck.”

As for which dog to select, Potter said it has less to do with breed than personality.

“A submissive dog is better than a dominant dog on a truck,” he said. “One of the ways you can tell if a puppy is going to be dominant or submissive is you put them on their back and hold them there. If they fight you tooth and nail, they’re going to be a dominant dog. If they submit, in 15 to 20 seconds they kind of give up and let you hold them there, that’s a better dog for the truck.”

Potter has put his considerable training skills to effective use with each of his trucking hounds. However, he said, none rival the encounter that brought Magellan, his first pooch, aboard.

“I was in Cortez, Colorado, to take my 34-hour reset,” Potter said. “The Humane Society happened to be nearby, and I thought, ‘Well, I’ll walk over there and pick the saddest-looking dog and see if I can take him for a walk. It’ll brighten his day and mine.’

“There was a dog in quarantine separated from the other dogs. He’d been labeled as a mean, ‘do-not-approach-this-dog’ kind of thing. Well, of course I took that as a challenge,” Potter noted.

Within 10 minutes, Potter was inside the supposedly vicious dog’s cage, seated on the floor. Upon noticing what was happening a kennel worker started shouting at him.

“He said, ‘Get out of there! That dog is in there for biting somebody,’” Potter recalled. “And I said, ‘I want to walk the dog.’ He says, ‘Dude, you need to get out of that cage,’ and he came over to try to take me out and the dog growled at him.

“I said, ‘You go tell your supervisor I may be interested in adopting this dog, but I definitely want to take it for a walk first,’” he said.

The center manager wasn’t sold on the idea, but seeing as how the dog appeared to be on Potter’s side, she relented. The staff was so impressed with how the 70-pound pit bull mix passed his walking test that the manager allowed Potter to take the pooch for a ride in his rig. Passing that — and with Potter’s written assurance that the dog would never reside within that county — the dog came home with Potter to South Carolina.

“That was my first trucking dog, and I named him Magellan after my GPS,” Potter said. “The sad thing is, I only had him for six months. I live on 2 acres and the second time I took him back there, he went outside and didn’t come home. A little after that, I saw him walking up the steps. He was injured and the best the vet could figure, he got bitten by a copperhead.”

Unfortunately, Magellan succumbed to his injuries. Following Magellan’s death, Potter discovered Zeus, a Belgian Malinois of superb athletic ability. Potter says he never felt safer on the road than when Zeus was along for the ride.

“Two feet from the door, he could jump over my head, through the open window and land in the passenger seat, without a running start. And he was 90 pounds,” Potter said. “He saved me from getting stabbed in West Memphis (Arkansas) once. I exited my truck, and two guys were breaking into my trailer. Well, one of them got over the fence but the second one left his bloody pants behind, along with a wallet and his ID I could give to the police.”

After Zeus, came Baxter, a German boxer whose fearsome appearance belied a sweet, gentle nature. After Baxter was tragically hit by a car last spring, Nala came aboard. Since then, Potter is rarely seen on the road without her.

Given Potter’s obvious love of dogs, it comes as something of a surprise to learn that when he started driving 10 years ago, he wasn’t eager to have one ride shotgun. Now he wouldn’t have it any other way.

“I was without a dog for a short time after Baxter, and I just didn’t like it,” he said. “A dog keeps me active. I tend to be lazy if I don’t have a dog to walk or play with. So, it’s good for me and good for the dog.”

This is a dog poop bag holder – Yahoo Lifestyle

Dog People Rejoice: Owning A Pup Is Good For Your Cardiovascular Health : Shots

Dog People Rejoice: Owning A Pup Is Good For Your Cardiovascular Health : Shots