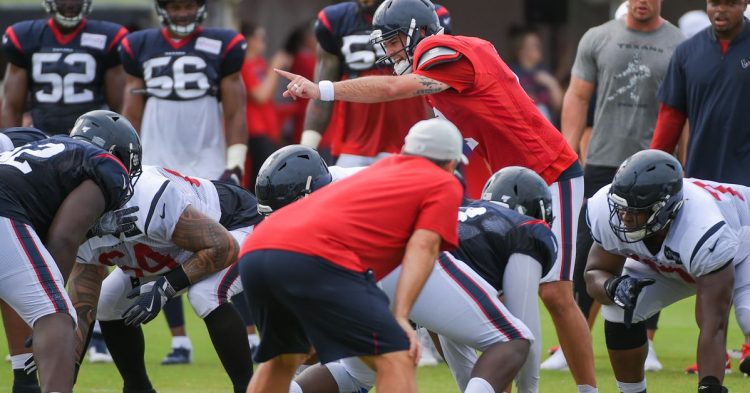 Houston – There is a feeling in the air, a sense of anticipation not felt in some time. Summer may be entering into the “dog days”, when the days are very long, and very, very hot. Or, for the primary audience of this article, the calendar is barely at the halfway point of the “mother-[Easterby] hot” season, right on the cusp of fading to just “ludicrous hot” by September. This will evolve with October, bringing about the long-sought after “just slightly hotter than the 8th level of [Easterby]”, a time of the year that less sweltering-like-the-inner-core-of-the-sun-parts of the US call “autumn”. This brings about that most sought-after-time on the Houston sports calendar: Watching all the UT and A&M fanbases dilute themselves into thinking their respective not-professionally-paid-but-really-treated-like-professional-athletes-football programs can actually compete for a national title, which they will not even come close to winning. (yes, that accounts for a possible change in the offensive order of the defending champion).

Oh, wait, sorry about that…we are talking about overt professional programs…right. Even with the NIL stuff that teams can now do out in the open start? Ok, ok…we mean the Astros finding a way to tick everyone off and be back in the thick of the playoff race…

[Easterby] It! We meant to discuss football. Ok, we eagerly await the MLS and NWSL playoffs to see if the Dynamo and Dash will make it…wait, what? Oh, you mean THAT football…FINE, FINE!!!!

“At last, the blessed day is upon us!!!” Exalted team Executive Vice President and Pontifex Maximus of the Church of the Blessed Easterby, Jack Easterby. “After the off-season, which just really got in the way of our holy mission of bringing good Christian character to the souls of the willing for the NFL, we are back, and better than ever. Armed with a new staff, new disciples, new everything…well, almost new everything. I, your most humble servant and reigning champion of the Game of Texans Front Office Thrones, am still around. I just do my part, a mere Executive Vice President with significant input into every and all personnel and player decisions. When you are a modest, critical node for a multi-billion dollar organization, you have to keep things in perspective.

Observed new Texans GM Nick Caserio: “This can be a great time, as we get a chance to see what all of our new players can do. Yeah, I guess we do have to cut some guys, including…including…inclu…guys [in a raspy, choked-up voice], I am going to have to stop for a minute…please?! [2 minute pause] Ok, Ok…I’m ok. A little emotional…It’s just soooo HARD to think that I will have to cut one of the myriads of linebackers and running backs we signed in the off-season. That is perhaps the worst part of this job. I mean, my previous employer didn’t give an [Easterby]. One hand motion and that was it. On to the next…whatever. Now that I make the calls…it is kinda personal. On the plus side, for all the players that get cut, that just means that many more linebackers and running backs I can sign. I guess we should account for other positions, but as long as we have qualitative quantity of linebackers and running backs, we are good.”

“It will be good to start training camp…and to be the man!!! Oh, I am sorry, I mean to be the on-field, play-calling, responsible-for-all-of-the-blunders/shortfalls/errors/losses as per the agreement that I signed with the Exalted and Blessed Easterby…and the bill-paying Cal” noted Texans Head Coach David Culley. “It will be different being the head coach. Usually I am just worried about one position, like wide receivers, or quarterbacks, or something small like that. I tend to be focused on the small stuff, but if you can do small stuff good, you get good, small results…or something like that. Of course, the scope is bigger as the head coach. Apparently, I have to plan for not only the positions, but I guess the entire offense. wide receivers, quarterbacks, offensive linemen…all of them. On top of that, I was just told that to account for some other parts of the game, like the guys I don’t coach normally, the, oh, whatchamacallem…oh, yeah, the Defense!!! Had to think about them. Yeah, I got Lovie to help, but man…Oh [Easterby]!!! Then there is special teams, and game management…and.and…and..and it’s like having to manage your salsa, queso, jalapenos, beef…all of the toppings for the nachos, just like those I had…

“I just hope that all the players, especially our rookies and new guys, are reading all of their player guides. Got a lot of material for them to read. Not just read, but they need to be able to comprehend and apply that information once they get on the field” warned Jack Easterby. “We put a lot of effort into the pre-camp material. There are the obvious things, like the playbooks, the team rules, etc. But we also gave them the right material to help develop the ‘character’ aspect of this team. The right type of Bible, the right type of Concordance, the right type of Catechisms…you have to think of these things. Of course, it is not all books or e-files. We have an extensive podcast of some of the key philosophies we expect the team to follow for greater Easterby veneration, er, character development. Oh, and thanks to the deal we made with NSO, we will know if the players did their homework, guaranteed!

Will all of this material, one wonders which got a greater workout in the off-season for all of the Texans players. Mental or physical? One way or another, we will start to find out come Sunday, when the camps open, the sermons begin (starting with The Book of Texans, Chapter 2021) comes out to preach its message of character, and hopefully a few positive plays along the way.

What happens to worn out rock climbing ropes? This teen turns them into dog leashes and gives all profits to animal groups. – The Washington Post