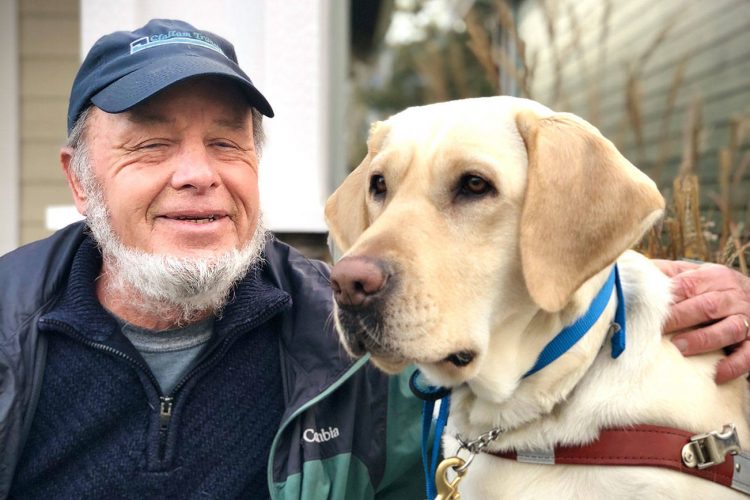 SEQUIM — Kyle Parrish of Sequim has plenty of post-graduate work to do … with a yellow Labrador.

Parrish, 68, recently graduated from Guiding Eyes for the Blind, a New York state-based nonprofit that since its inception in 1954 has graduated more than 7,000 guide dog teams.

Parrish said he’d had four other guide dogs through Guide Dogs for the Blind and chose to go with Guiding Eyes through their home training program for those unable to travel to the Yorktown Heights (New York) campus.

Known by many in Sequim for his black Labradors, Parrish will now have the fair-furred Ambrie by his side instead.

“As far as the guide work goes, we’re working on it,” Parrish said. “It’s the same with all four of the other dogs; you have a few months (of training) to get it right.

“She’s got a sniffing problem, which I’ve experienced with all my other dogs. At home, she’s wonderful. You get out on the road (with) people and dogs and distractions — they’re a challenge.”

State regulations regarding dining services have moved some local restaurants to offer outdoor/curbside dining services, which present a number of difficulties for locals with vision challenges, Parrish noted.

It’s a similar struggle Parrish battled about 25 years ago when he worked with city officials to clean up the sandwich sign regulations, he noted.

“I’m with the businesses (but) pedestrians are always the last concern,” he said.

Parrish lost the vast majority of his sight in 1967 at age 15 when a tumor that crushed his optic nerves left him only with some light perception in his left eye.

“(That) light perception in one eye is very helpful, but a guide dog for me is essential,” he said.

Parrish worked for years with Clallam County System’s para-transit services, and served as director for the nonprofit Vision Loss Center. He led the Visually Impaired Persons of Sequim (VIPS) to advocate for individuals with vision disabilities. (The audible signals at crosswalks in Sequim and Port Angeles are a legacy of his advocacy.)

He said that while approaches to accessibility from local entities like the city are better than they were when he moved to Sequim, it is still a struggle to ensure everyone can use local sidewalks. In previous interviews, he estimated the North Olympic Peninsula has about 2,500 people with visual impairment.

“A lot people have needs that aren’t being met,” he said.

A Sequim resident for about three decades, Parrish said he’s retired but still advocates when he can for pedestrians — and particularly those who want to use public transportation.

“Let’s get as many people off the street and from their cars as we possibly can,” he said.

Parrish had been without a guide dog for some time: about two-and-a-half years ago he “washed out in training” with Guide Dogs for the Blind when trainers determined his recently replaced knee was too unstable for a partner. This time around, with a healthier knee and a home training site visit through Guiding Eyes for the Blind, he’s ready to prep Ambrie for the Sequim streets.

“They (worked) with me in my home area; the dogs are trained to follow the sidewalk, go up and down curbs,” Parrish said. “Each area is different. We’re not the big city, obviously. Around here, it’s kind of a mixed bag. All of a sudden the sidewalk disappears. There is none. You have to target certain places you want to go to.”

Parrish said much of the training focuses on handling distractions not from the terrain but people he encounters, from people wanting to pet his guide dog to simply running out in front of the pair.

But Parrish said he thinks Ambrie is going to catch on soon.

“Once we get in sync it’s going to be very good,” he said.

For more about Guiding Eyes for the Blind, see www.guidingeyes.org.

Michael Dashiell is the editor of the Sequim Gazette of the Olympic Peninsula News Group, which also is composed of other Sound Publishing newspapers Peninsula Daily News and Forks Forum. Reach him at [email protected].