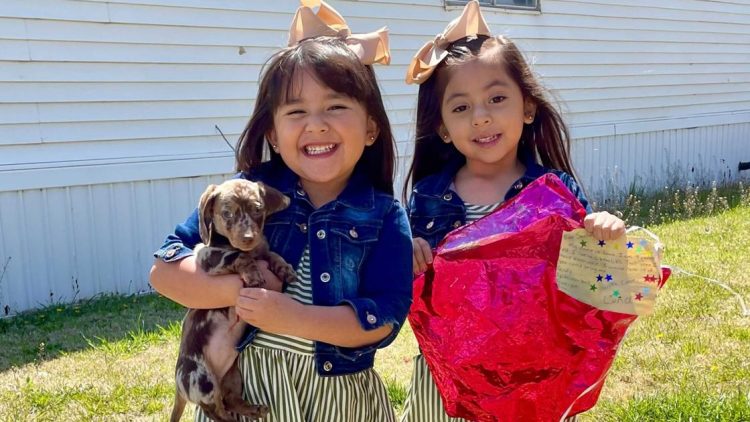 The coronavirus pandemic had taken a toll on 4-year-old twin sisters Gianella and Luna in Liberal, Kan.

Suddenly, their learn-and-play sessions had stopped, invitations to birthday parties appeared to be no more and bright orange tape blocked off their nearby playground.

To help them cope with pandemic life, their mother, Leticia Flores-Gonzalez, started making more arts and crafts projects for them and documenting their creations, she told The Washington Post in an interview.

In early December, the twins embarked on another project: sending Christmas wish lists to Santa with red balloons. One of those balloons found its way to Alvin Bamburg in Shreveport, La., more than 500 miles away.

Bamburg’s discovery led to the girls receiving everything from their Christmas list and a new extended family.

Flores-Gonzalez, 37, said she is stunned by strangers’ generosity that came from an idea she heard from a relative in Mexico who did the same activity with their child.

“I took a picture of their letter because I never thought we’d see it again,” she said. “It was super windy and cold. I didn’t expect it go any further than Liberal.”

Flores-Gonzalez said the family vacationed in Mexico, then headed to Oklahoma City, Okla., to spend New Year’s Eve with her parents, who had moved there before the pandemic was in full force, she said.

Two days before Christmas, retiree Bamburg was hunting deer in Grand Cane, La., when he spotted a red balloon with a note stuck in a fallen tree. A little girl in Kansas had written to Santa that she had been good girl all year and requested a Disney “Frozen” doll, a puppy and a few other gifts.

Bamburg sat on his finding for a few weeks before posting his catch to Facebook.

Flores-Gonzalez said she was conflicted about responding.

“I felt bad. I didn’t want gifts. I didn’t do it for that purpose,” she said. “My sister and family told me it’s a once-in-a-lifetime thing. Finally, after we spoke for a while, they convinced me to go ahead and get ahold of Alvin.”

About four or five boxes of gifts were shipped to the girls, along with another box of gifts for Flores-Gonzalez and her husband.

“We didn’t want to leave anybody out,” Bamburg said, but there was still one last thing the girls had not received: a puppy.

Bamburg, a father of two daughters and grandfather of a little girl and a grandson approaching 18 months, said he just had to get the puppy for the twins.

“It’s just the way me and my wife are,” he said. “If you can ever do anything for anybody, do it. All I thought was: I got to get these two kids a dog.”

Helping comes naturally to him, and the pandemic has offered a lot of opportunities to support people in small ways, such as paying for a family’s groceries or giving away his pack of chicken to a larger family when grocery stores had limits on protein purchases, he said.

“It just warms my heart and it makes the rest of my day,” he said. “People just don’t realize there are so many opportunities (to help). … I get more joy out of helping individual people.”

Flores-Gonzalez said her girls had been asking for a dog shortly after the family had to put down their 12-year-old Chihuahua in March 2020. She and her husband tried to find small dogs they could keep in the house, searching in shelters across Texas and Oklahoma to no avail.

Bamburg also ran into the same problems when trying to find a shelter dog in Louisiana until his younger daughter, a veterinarian, suggested a dachshund breeder who had heard about his tale involving the red balloon. She let him take home the pick of the litter, he said.

Flores-Gonzalez and Bamburg arranged to meet in Oklahoma City to surprise the girls with the one item that had not been crossed off their lists.

They were a little a hesitant at first, Bamburg said, but once Max the puppy ran over to them with his wagging tail, their relationship changed instantly.

“That removed any barriers,” he said. “It didn’t matter, race or color, I was their instant step-uncle or step-grandpa.”

Flores-Gonzalez and Bamburg communicate almost daily, giving updates on how the girls are getting along with caring for a puppy and checking on each other like old friends.

The new friends, who consider each other family, said they plan to meet up again in May in Oklahoma City, and Flores-Gonzalez said she and her husband are talking about planning a trip to Louisiana this year.

“There’s so much depression, so much sadness going on. Some people are losing their families because of this pandemic,” Flores-Gonzalez said. “This gives us hope there’s so many wonderful people still on this earth.”

A Pandemic Gives the Funny Pages a Jolt of Reality