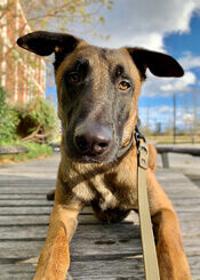 UPPER GWYNEDD — The two newest members of the Upper Gwynedd Police Department are currently in training, but already online.

Police Officer Matt Toro recently gave the board a preview of the department’s next two officers, both of the four-legged variety.

“There are many different ways to get a police dog. It wasn’t as simple as just going to one vendor,” Toro said.

Late in 2019 the department decided to proceed with establishing a police canine unit, Toro said, and he and fellow officer Ed Tartar have done extensive research since then on where and how to find their future partners. Their selection was the University of Pennsylvania’s PennVet Center, Toro told the board, and he and Tartar have chosen two dogs, a Belgian Malinois named Fury and a Dutch Shephard named Gunner, who are currently being trained for bomb and drug detection.

“They’re all impressive, but Fury and Gunner, I think, were outstanding,” police Chief David Duffy said.

Both dogs have been featured in several YouTube videos on PennVet’s channel, chronicling their training, and both were named after rescue dogs deployed in the aftermath of the Sept. 11, 2001 attacks, Toro said.

“You can watch from the time they were very little, up until a couple of weeks ago,” he said; Township Manager Sandra Brookley Zadell joked, “I’m definitely doing that tomorrow,” before asking the officers to bring the new canines to  meet the board and public once in-person meetings resume.

Board President Liz McNaney added that she’s seen therapy dogs used to help encourage students with developmental difficulties learn how to read, and she and board Vice President Denise Hull thanked the two officers for their efforts.

“I think it’s going to be mutually beneficial. The time put in will be well worth it, when all is said and done,” Toro said.

“Every K-9 handler I’ve talked to, it’s been a resounding answer of ‘Best thing I ever did, the best eight to ten years I had was with the dog,'” he said.

‘Jeppy Property’ plans nearly ready: If you’ve been keeping an eye on the plans for the so-called “Jeppy Property” in Upper Gwynedd, clear your calendar for March 23.

That’s the night township officials and residents will see and hear much more about the current plans for the Sumneytown Pike site.

“The date, importantly, has been scheduled and set and advertised and posted, for March 23. It is a matter that will be considered by the zoning hearing board,” said township planning and zoning officer E. Van Rieker.

“For those following along, it has been modified such that the current proposal specifically has been changed to permit 17 townhouses on that property,” he said.

The property in question is roughly three acres between 773 and 781 Sumneytown adjacent to Canterbury Drive, where plans were presented in 2003 to build a three-story hotel but never advanced to approvals. More recently, plans were presented in summer 2020 by developer W.B. Homes for two 12-unit apartment buildings, which were then tabled in September 2020 so the developer could continue talks on a modified plan with nearby neighbors, and Rieker reported in January and then February 2021 that the latest plans were nearly ready, and the commissioners could vote to show their support or opposition.

“You, as a group, can decide whether you want to participate or not. If you do, you normally would advise the solicitor” whether to support or oppose the application, Rieker said.

The project was discussed briefly during the board’s March 8 meeting, with no questions or comments from the commissioners, and a vote is listed on the board’s agenda for their March 16 meeting on whether to send the solicitor to the zoning hearing board meeting on March 23.

“Everyone knows this developer has worked really hard to change, and make, their plans something that the residents are comfortable with, in that area,” said Zadell.

“At the business meeting, you can make a decision on how you’d like to move forward with that, but the way that we’ll be listing it on the agenda will be that you’ll be sending the solicitor in support of the application,” she said.

Goals up for discussion: The board did hold a lengthy discussion on March 8 on their goals for 2021, and how to build off of accomplishments from the prior year.

A three-page list of goals broken down by department and completion status was included in the board’s meeting materials for March 8, and Zadell said several were successfully accomplished in 2020, such as a software upgrade for the township’s code enforcement department, while others have extended into 2021 like new notifications for removing cars from streets during snow emergencies

Donated funds up for discussion: Zadell also asked the board for feedback on how to spend an unexpected windfall of $50,000 from an anonymous donor.

“We are so lucky, in Upper Gwynedd Township, to have an anonymous donor who has chosen to donate some funding to the township. This year, he indicated that we should use it for what we see best,” she said.

Zadell said she provided the board with a memo outlining several possible uses, including for preservation of open space, funding communication equipment upgrades for emergency responders, or supporting the North Wales Area library. McNaney added that she liked the idea of covering costs of the Upper Gwynedd Volunteer Fire Company’s annual banquet, which the board had discussed shifting from township to fire company funds due to tight budgets.

“It’s a celebratory event, which they deserve, and I was thinking we could give them that donation, to pay for that celebration for them. Because they should be celebrated,” she said.

Commissioner Katherine Carter added that she’d like to see some of the funds used to support firefighter recruitment incentives, and/or upgrades to a fire company fitness center. Zadell said she’d contact the company for more details on exact costs of each possible use, and give more details at upcoming meetings.

Upper Gwynedd’s commissioners next meet at 7 p.m. on March 16 and April 12; for more information visit www.UpperGwynedd.org.

Woman, dog in good health after a night in winter weather

Woman, dog in good health after a night in winter weather