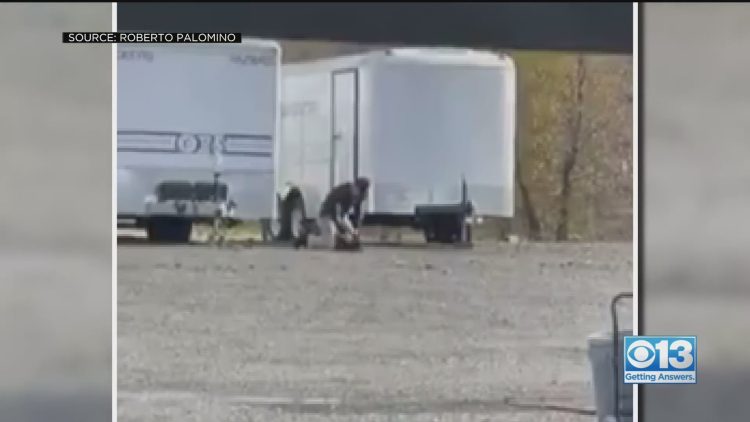 VACAVILLE (CBS13) – A Vacaville K-9 officer seen punching his dog has been booted out of the K-9 program and reassigned. This, as the department met with the city council after an internal investigation into the encounter captured on camera.

“I feel confident that this is not going to happen again in the city of Vacaville,” said acting Police Chief Ian Schmutzler.

Shocking video of a Vacaville police officer punching his four-legged partner recorded by Roberto Palomino back in December is prompting changes to the program.

“I can still hear the dog crying,” Palomino said. “There was an officer beating a dog really bad. It was closed-fist punching in the face to a dog. He punched the dog several times before I was able to get it on camera.”

The officer is off K-9 duty. A 4-month long internal review into the officers’ actions, the well-being of the dog, and the overall K-9 program resulted in the dog being returned to its owner and ongoing updates to training standards.

Based on very limited standards would an officer be justified in striking a dog,” explained Schmutzler. “We need to focus on additional training for the K-9 handlers. 1. We need to check the personality between the dog and the handler, does that fit. In addition to that, we need to provide a lot more training,” he said.

The department hired a consultant who has recommended several changes to their program that the department is looking to adopt.

Schmutzler explained that during a training exercise the officer, a new K-9 handler, with a few months of training, hit the dog after feeling threatened.

“They are jaws with brains and there is a potential that something could happen and they need to understand that going into that,” he said.

“The evolution of K-9 training in law enforcement has evolved from an old-school hard-on-your-dogs type of mentality to now we are not as hard on them,” explained Cloward. “Eighty percent of dog training is patience because you are working with an animal; at the end of the day, they are a dog. We are trying to appeal to their desires and motivations,” he said.

Cloward encourages handlers to spend at least a month with the dog before active training. While correction can be aggressive, he says any type of violence towards dogs is not standard policy.

“The biggest thing we try to achieve is relationship and they both respect one another,” he said.

The department plans to publish the reports on their website along with new standards for the K-9 program.