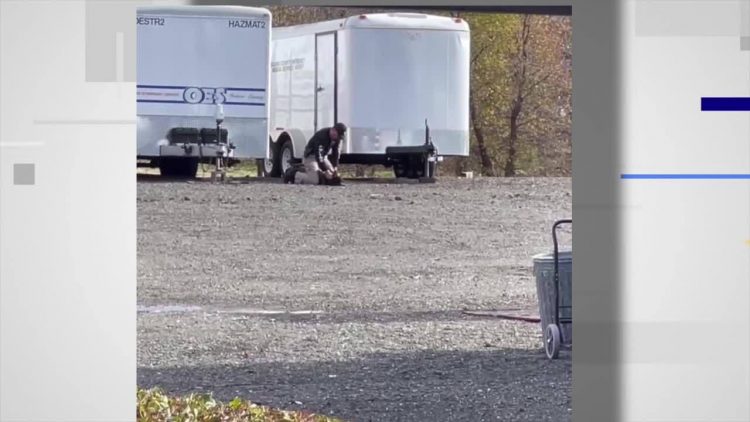 Warning: Imagery in the video below may be disturbing to viewers.

Vacaville police also said the dog was examined by a veterinarian and showed no signs of injury or distress.

While the incident is being investigated, the police department says they will consult a third party dog trainer.

“I hear the crying and it caught my attention. As I looked over, I see an officer punching over and over a dog,” said Roberto Palomino. “Disturbing to watch.”

Palomino said he was near his workplace along Vaca Valley Parkway when he saw the officer punch the dog several times.

He said the dog was doing an exercise to find narcotics and was rewarded with a toy. But when his handler took the toy away from him, Capt. Lydon said “that angered the dog.”

“And then the dog, in turn, lunged at the officer and attempted to bite the officer,” Lydon said.

The officer was not bitten by the K-9 but Lydon said the mere attempt to bite had to be addressed by the officer by establishing his dominance.

“And why it’s important is the handler has to have complete control over that K-9 to ensure public safety,” Lydon said.

Blair Diamond of Primal Needs Behavioral Solutions in Mount Shasta has trained police handlers and their K-9s up and down the state for more than 15 years.

He said if the dog showed his teeth or gums to the handler “being physical with the dog is OK.”

But he and Capt. Lydon acknowledged the public will not be OK with that. He said people do not understand the unique relationship between an officer and his K-9 partner.

“These dogs are not your normal pet dog,” Diamond said.

The video has no audio, so Diamond could not hear if the dog was crying.

“The thing is once a dog goes submissive to you, it’s not OK to be physical anymore,” Diamond continued.

The officer has been on the force for about seven years and is new to the K-9 program, according to the Vacaville Police Department. He and the dog have been training together for three or four months and are not currently on patrol.

Drs. Oz & Roizen: Diabetes, your dog and you | Health

Drs. Oz & Roizen: Diabetes, your dog and you | Health