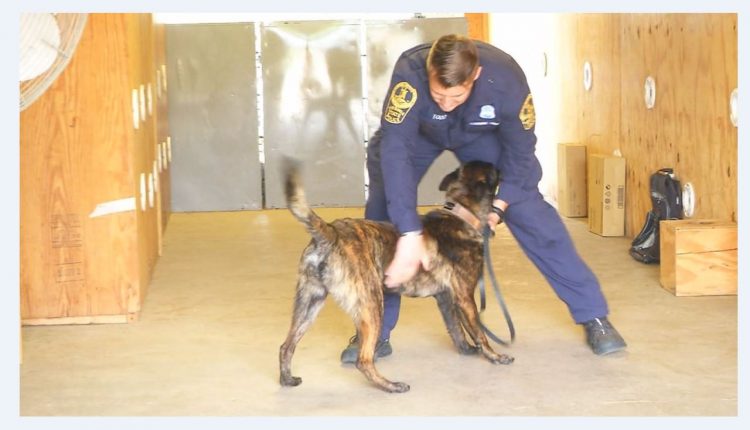 CHESTERFIELD, Va. (WRIC) — Virginia is less than a month away from marijuana being legal across the state. The new legislative change is bringing changes for drug-sniffing police dogs.

Marijuana is still illegal in the Commonwealth, but that will all change on July 1. Adults will be able to legally possess an ounce of pot and Virginia State Police are adapting to the changes. The agency has retired 13 K-9’s, that were trained to detect pot, and are currently training new sets of paws.

For the past six weeks handlers have been working with 13 new pups to get them up to speed before next month. 8News visited the VSP Training Academy on Wednesday to see the action, watching Sig, Cash, and Whiskey train for the day.

“We have to adapt and work with the new laws,” Sgt. Amos said. “Once a dog is trained to detect an odor–we can’t untrain that.”

Due to legalization of pot in Virginia, 13 VSP K-9’s, currently trained to sniff-out pot, were forced to retire their noses. Amos told 8News they made the decision on which dogs, based on ability and age. He adds that they are all going to enjoy retirement and relax.

Amos and his team have been busy preparing the 13 new dogs and getting the 13 others ready for retirement. The others include Apollo, Aries, Bandit, Blaze, Jax, Kane, Mater, Nina, Reno, Sarge, Thunder, Zeus and Zoey.

“A dog is not like us. We can’t just tell it to ignore this odor of marijuana anymore,” said Sgt. Amos. “With the legalization of marijuana we didn’t want to subject anyone to an illegal search.”

To avoid illegal searchs of marijuana, VSP is implementing new training with the new dogs. The agency bought the new K-9’s for roughly $7,000 each from overseas. However more costs are involved in the training. The new dogs are only being trained to detect methamphetamine, ecstasy, heroin, and cocaine. According to Amos, VSP canine’s will no longer be sniffing for marijuana during traffic stops when the new law goes into effect.

Sgt. Amos described the training as a ‘game’, similar to hide-and-seek and showed 8News how it works, demonstrating with Sig and his handler. An odor of a drug was hidden in an abandoned car on VSP’s property. The handler gives the command ”go find it” to the dog. At that moment Sig took off, sniffing around the car until he detected the smell coming from the car’s trunk. Sig then alerted the handler by sitting at attention, while another dog, Cash, jumped up and down pawing at the trunk to alert the handler. A toy is used as a reward, followed by a lot of praise from the handler.

“Dogs are very important for the department,” Sgt. Amos explained. “The dog walks into any situation with no preconceived notions. They simply use their sense of smell.”

Amos adds that some marijuana sniffing K-9’s will still be used at airports and on commercial motor vehicles.

All 13 new dogs will be trained and ready to be out on the streets by July 1. As for the retired 13 K-9’s they have all found “fur-ever” homes. Each and every dog was adopted by its handler.

Health Official Said ‘Doggie Cones’ Could Be Used As PPE