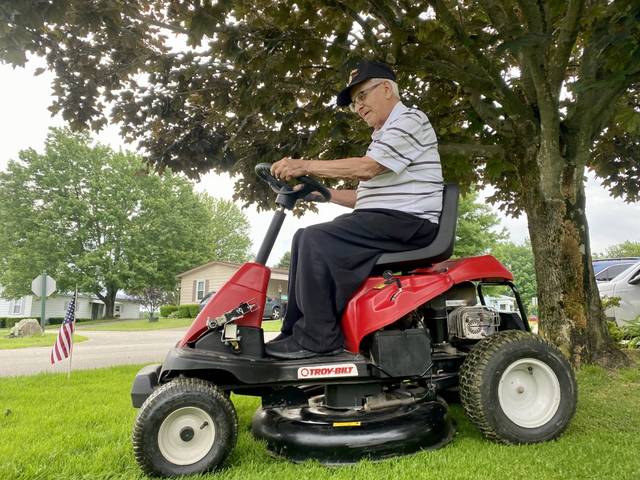 The new centenarian remains almost entirely self-sufficient, including handling his weekly lawn-mowing duties on his own.

“I have to trim too,” Pugliano said.

Pugliano, a World War II veteran, celebrated his 100th birthday with a large, picnic-style party at Boyce Party on Sunday. His birthday was Monday.

“I loved seeing my friends and family,” Pugliano said of Sunday’s party.

Pugliano immigrated from Italy to America when he was 6 and went on to graduate from Penn Hills High School in 1942.

It was in high school where he met the love of his life, Mary Strough. They were married for 65 years and raised two children together.

During World War II, Pugliano enlisted in the Army and served for three years in the Pacific theater. He survived a torpedo attack by the Japanese on his convoy mission to Luzon in the Phillipines, but said he watched as a lot of young men lost their lives that day.

“His health is remarkable and he doesn’t look his age. His frame of mind, everything … it’s absolutely incredible,” Pugliano Jr. said.

The elder Pugliano said his other angel is Maggie, his 15-year old pet dog.

“I’ve had her since she was a baby. That’s my little angel,” he said, holding Maggie on his lap in his home Monday.

Pugliano worked as a diesel mechanic, specializing in heavy equipment.

He said his lifestyle consists of “good Italian genes” and staying active.

“The doctor told me, “Whatever you’re doing, do it,” Pugliano said of his excellent health except for bad knees.

“That’s how I keep in touch with my relatives,” Pugliano said.

He was employed for 15 years at High View Acres up until the age of 98, maintaining the clubhouse at the 55-and-over residential community.

Neighbor and longtime friend Denise Molnar checks on Pugliano daily and surprised him on his birthday by decorating his front yard with a 100th birthday sign and numerous American flags.

“She’s one of the best friends I ever had,” Pugliano said of Molnar.