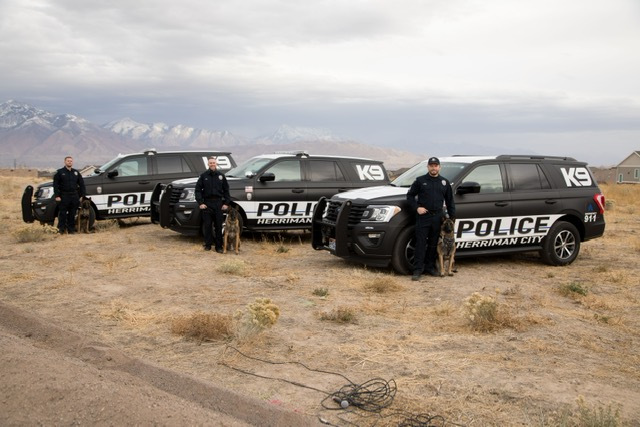 HERRIMAN, Utah (ABC4 News) – Keeping their community safe is part of the Herriman City Police Department’s greater mission. Their K-9 team growing after one of their own lost his life in the line of duty.

“We consider them just like one of us,” said Zach Adams, a commander with the department.

“My dog at the time, Hondo, and I came over from Unified Police. He was already up and running. He was certified with narcotics and patrol,” Ricks said.

“He absolutely protected our guys from bad situations. People who really intended to probably cause harm to our officers,” said Adams.

With Hondo gone and a growing community, officers and K-9 Daavo welcomed Grizzo and Jocko to the team.

“Having three dogs within such a small department is that we’re going to be able to have a dog on every day of the week,” Ricks said.

The two are still in training, but soon, they’ll be narcotic and patrol certified.

Outside of work, Ricks said Davvo has a personality of his own.

“My dog is a big goofy kid at home. He rolls around on the floor with my kid and gets hair all over him,” Ricks said.

But when this duo goes to work, Ricks said Daavo knows his role.

“To turn around, I put his dog harness on him – that’s his uniform – and bring him to work and he’s ready to go,” Ricks said.

Keeping locals safe and out of harm’s way.

“It’s a lot safer to get my dog out and have him out at the end of a 15-foot leash looking for a bad guy than it is just to go by myself,” Ricks said.

“You’ll hear K-9 referred to as just another tool of law enforcement, there’s some truth to that, but to us, they’re much more,” Adams said. “They’re actually one of our officers. We couldn’t do our jobs and be successful without the partners that we have.”

Before Herriman K-9’s begin training, Adams said the Belgian Malinois’ are integrated into the handlers’ family.