What Should You Do If A Dog Attacks You Or Another Dog? 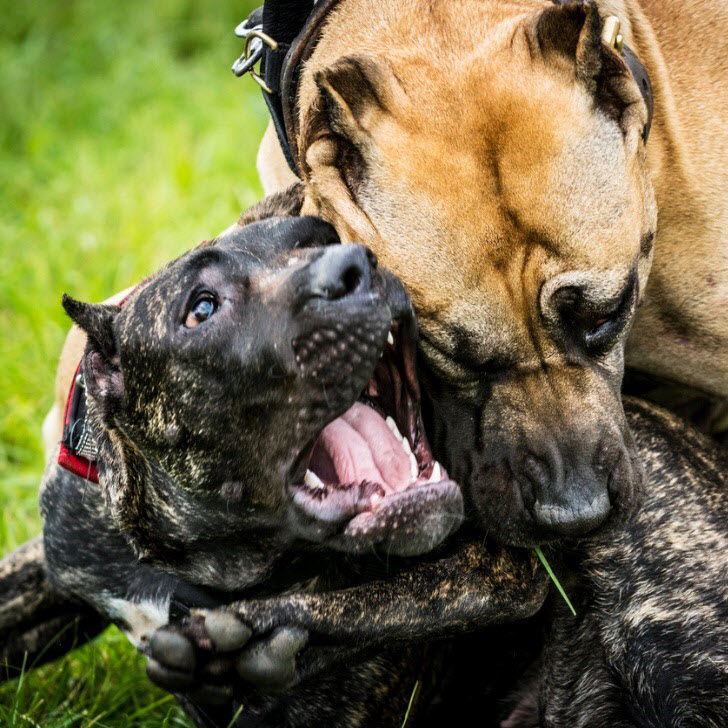 Dog bites are known to be lethal as they can cause injury and serious infection to a person or another dog. The bites can range anywhere from small punctures in your skin to deep flesh wounds. A dog is considered dangerous when it makes people fear for their safety or has already attacked another person. People always treat their dogs like family by feeding them, training them, taking good care of them and watching them grow. It is quite unfortunate that other dog owners do not provide the same care to their dogs, making them aggressive towards strangers and other pets in public. It is a frightening experience for you or your pet to be attacked by another dog when out for a walk. We formulated a guide to give you an idea of what to do should the worst happen to you or your dog when away from home.

1. Legal Rights When A Dog Attacks You or Another Dog

A dog owner may be in trouble if his dog attacks a person or another dog in public. It creates widespread panic in the neighborhood since people fear for their own safety. To help curb the threat, law firms provide legal rights for dog owners in situations where they encounter an attack from another dog.

i) Were You Bitten By A Stranger’s Dog? 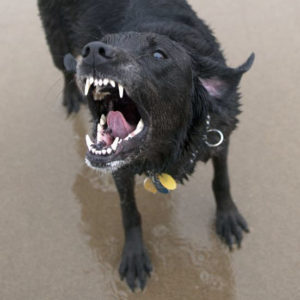 The owner may be responsible for harboring a violent or aggressive animal if the dog that attacked you is listed as a dangerous dog. These are dogs held liable for any veterinary bills or damages they might have caused in the past years.

Dangerous dogs, especially ones that have been banned, will have to be put down and the owner is usually held responsible for settling the costs associated with the attack.

ii) Was Your Dog Injured By Another Dog?

The state leash laws require a dog owner to control and constraint their dogs using a leash to prevent them from attacking people or other dogs in public. Not all dog owners obey this law as they allow their dogs to wander aimlessly without any form of constraint or control. If your dog is seriously injured by an aggressive dog, the owner will be penalized for breaking the state leash laws and will be liable for any costs you incur in the process.

iii) Were You Bitten While Protecting Your Dog? 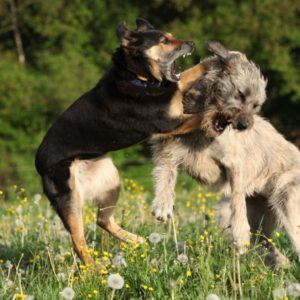 There are situations when a dog may growl or bark when they come across other dogs in the neighborhood. In the event where they get into a fight, you are likely to suffer a bite from your own dog while reaching out to protect him from the attack.

Even though you were bitten by your own dog, it is still possible for the other dog owner to be held responsible because your dog was provoked by their presence or invasion of space.

There are several reasons why dogs attack- they don’t just bite out of the blue. Some of these reasons include aggression, invasion of space and the vicious circle of the prey instinct.

Most people always regard any dog bite as aggression when in real case, it is caused by normal or their natural means of communication. Aggression in dogs is attributed by stress and a dog may attack depending on their level of bite threshold. If a dog has a high bite threshold, it will require a lot of stressors for them to bite. However, dogs that have a low bite threshold can bite at any time as it doesn’t take much to convince them to attack.

ii) Invasion Of Their Territory 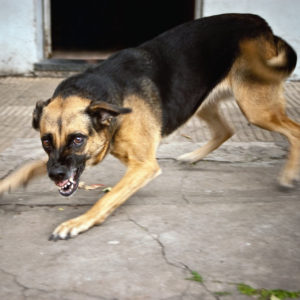 There are situations when dogs bite because their space or territory has been violated or trespassed. This is common with a mother dog who is still taking care of her newborn puppies. Such dogs may be forced to bite in an instance where they feel threatened by the presence of an intruder. They are always protective so as to create a safe environment for their little puppies to grow. Other dogs have the perception that humans might take possession of their territory and thus resolve the situation through bites. This defensive technique helps dogs relieve their stress since they may bite an intruder in one instant, and seem fine or relaxed after the occurrence.

Some dogs prefer to attack when a person seems to be moving fast or shows signs of fear. This mostly happens in the case of runners, joggers, and bikers. The motion of a person who is running in the courtyard or neighborhood triggers their prey drive. Not every dog can chase down or bite a person who is moving too quickly. It usually starts with a dog barking or growling to defend its territory when someone draws near them. Barking is a way of communication that makes the person go away. When a jogger keeps running, they go away and when they do so, the dog feels in command as it wins back its territory. However, a dog learns over time that barking makes an invader leave. This increases the dog’s level of excitement every time they dominate the space creating a vicious cycle with continued reinforcement. The increased excitement makes them more aggressive and bolder to the point of chasing the jogger or rushing towards a stranger with the hope of frightening them away. The unbalanced energy and enough excitement may lead to a dog bite or an attack without an intent of them causing harm.

3. What to Do If You Are Attacked by a Dog 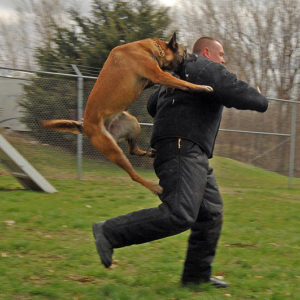 A dog bite can happen with a blink of an eye even before you get a chance to avoid the attack. When you have enough time to prevent yourself from a dog’s bite, the first line of defense it to let it bite something on you without sinking its teeth into your skin. For example, if you are wearing a sweater, quickly pull out your arm out of the sleeve and stretch the sleeve to the dog’s face. If it takes the bait, allow the dog to pull the sweater off and back out of the areas slowly before it changes its mind. You can use anything that can distract the dog in case of instant attack as it may be too late to call for help.

It is always important to protect your fingers by keeping your hands in fists. If you don’t have anything to distract the dog or it’s too late to do anything, the safest place for a bite to happen is the forearm or the shin. Although this doesn’t sound like a pleasant experience, avoiding a bite on the neck or thigh can help prevent fatal bleeding or a life-threatening situation. It is important to resist the natural urge to pull away your arm in case you are bitten. This only worsens the extent of injury as the dog is more likely to tear your flesh.

The best thing to do once you manage the bite to this point is to lift the dog off the ground by grabbing its hind legs. More importantly, always call for help when you are attacked since the pain surging through the bite area can be too intense to attempt anything too clever. If you are bitten, you need immediate medical attention to prevent getting an infection. It’s also important to report the matter so that legal action can be taken against the other dog owner.

4. How to Best Avoid Being Bitten 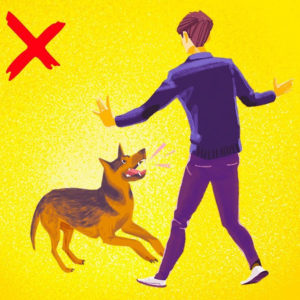 An aggressive dog always attacks when you act stressed out or display any signs of fear. The most important thing to remember when confronted by an aggressive dog is to stay calm and in control as it helps prevent them from attacking. Try to avoid direct eye contact but keep the dog in your peripheral vision in case it initiates a quick attack. It is a bad idea to start running or increase your pace in an attempt to get away from the dog.

Try to make yourself bigger or in command of your space using anything like an umbrella or a cane by stretching it out towards the dog. When you are calm and assertive, you create a barrier that demands the dog to show you respect. When they sense your courage and ability to defend yourself, they are more likely back off giving you peace of mind.

5. What If My Dog Is Attacked by Another Dog? 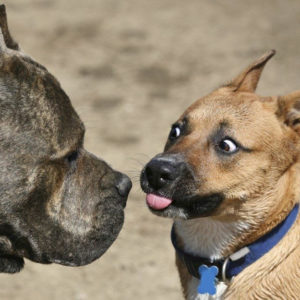 If you encounter an attack from another dog, use something like a stick to put a barrier between the dogs or anything that can cause a distraction. Never use a stick to hit the dog as they may respond aggressively towards you. Never pick your dog from a fight since the other dog can charge at you. If you happen to separate them successfully, ensure your dog receives medical attention to determine any symptoms of infection. Be careful when comforting your pet since dogs in pain are more likely to bite even if they are calm. You can also report the situation to ensure that the other dog owner pays for the veterinary bills and other cost associated with the attack.

Dogs aren’t inclined to bite humans or other dogs unless they feel threatened in some way. It is quite difficult to avoid dog attacks because other dog owners neglect their duty of providing good care and proper training to their pets. Dogs only bite when they sense any form of danger or a need to protect themselves from intruders. The only way to prevent a situation from escalating is by having a good idea to protect yourself during an attack and taking legal action against irresponsible dog owners.