Why Did Dogs Evolve Tails & What Do Their Movements Mean? 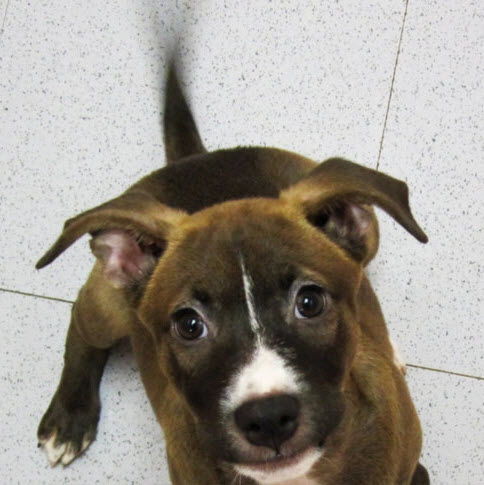 1. Why Don’t Humans Have Tails? 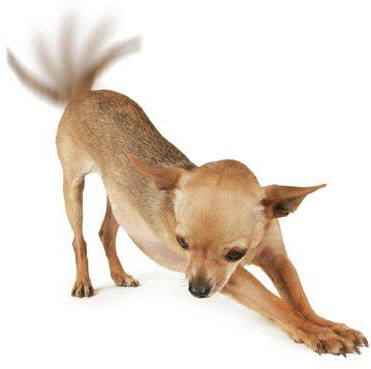 We all love dogs: they are a part of our everyday lives. They are our best friends, most admired companions and considered members of our families. But dogs are not humans: they look different from us, they engage in different behaviors and, perhaps most importantly, they act completely different. They act completely different in various ways, from the way they pant continuously to their predilection for digging up bones to one of their favorite hobbies of sniffing the posteriors of other dogs. But one of the most enduring questions of dog ownership, one which many dog owners will ask throughout the time they own a dog is, why they wag their tails. More specifically, what does it mean when a dog wags his or her tail? And what about the other movements that dogs’ tails can, and frequently do, make?Well, all of these movements are the subject of this blog post, and we’ll talk about them in turn. But first, before we get to the other movements, we’ll start with the most basic movement of all: why dogs wag their tails.

2. Reasons Why Dogs Wag Their Tails 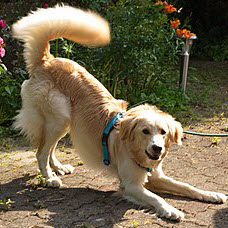 Dogs begin wagging their tails when they’re a month and a half old, and need to communicate with their siblings who were born in the same litter. For example, if the puppies’ playing around has become too violent, one of them might wag his tail, asking the others for the games to end. This movement, incidentally, is not unlike the wagging of a white flag for surrender. A young dog will also wag his or her tail when they’re asking another, older dog for food. As for adult dogs, it’s often believed that dogs wag their tails to represent happiness or delight. While this isn’t wrong, dogs definitely do wag their tails when they’re excited or happy, to the extent that the broad wagging movement represents delight, pleasure, or happiness, it’s not exactly complete. Rather, dogs typically wag their tails strong, intense emotions. So it’s natural that the particular emotion at hand can be happiness or pleasure-but it can also be other strong feelings, including anger, agitation, and irritation. It follows, then, that a dog whose tail is wagging from anger or irritation will not take kindly to interactions with humans, especially children-even though children are most likely to interpret the wagging tail as a sign of happiness. The dogs might even become aggressive. And when a dog is irritated or annoyed, the wagging tail might be similar to the kind of polite smile you or your human friends dole out when you’re annoyed but don’t want to make your feelings known. 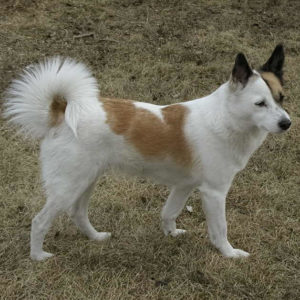 When dogs wag their tails, holding them high and erect on their bodies, then this shows that they’re aroused: something has alerted their attention, and it might be difficult to predict their next movements. On the other hand, a gently wagging tail, held backwards with a firm strength, might show that something has caught their interest and curiosity. And as for tiny tail wags that almost seem to throb, this means that the dog is about to make a quick movement. Often, it means that they’re considering whether they should stay or leave a potentially dangerous situation. Finally, if a dog is wagging his tail low to the ground, this means that he’s worried about something, or in a state of feeling insecure.Interestingly, tail-wagging has another (and much more obscene) function: to spread the scent that is present in dogs’ anal glands. Every dog has their own unique scent, in the same way that they have a unique DNA signature, or we humans have a unique fingerprint. Aside from wagging, dogs will release more scent the higher they carry their tails on their bodies, and less if they carry it lower. This is also partly correlated with why dogs hold their tails between their legs when they’re scared: they want their scent to disappear into the background. To put it another way, because of the or fear, they really don’t want other dogs to take notice of them. But that being said, tucking the tail between one’s legs has another meaning, too: the dog in question is being submissive, such as when they’re communicating with a bigger, more dominant dog, or when they’ve done something against their owners’ wishes-like jumping on the sofa-that they knew they weren’t supposed to.

3. The Use Of Tails In Canine Communication 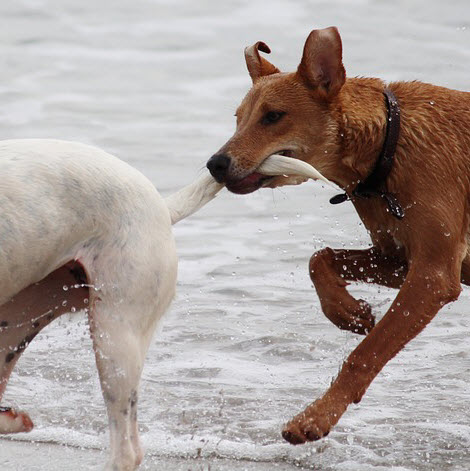 Tails are an important part of communication between dogs. Dogs will use them to convey their emotions and mental states to other dogs. Indeed, this facet of tails is so important that, if a dog encounters another dog-one who doesn’t have a tail, for whatever reason-she will act with caution, because she can’t gauge his emotional state, or how he’ll react to any given situation. As such, puppies and other younger dogs, unused to having to watch out for these kinds of potential triggers, will simply approach the dog with no tail, and attempt to play with him. Tails are especially used for communication when dogs are walking or simply standing up. Tail-wagging is performed exclusively in social contexts, whether a dog is with other dogs, humans, or even cats. It’s not something they need to do when they’re on their own-and when, as a result, there’s no need for communication with others.It’s worth noting, of course, that dogs don’t communicate verbally like we do, so they are generally much better at reading and interpreting body language than we are as well, because their lupine ancestors relied on their pack status to survive. Conformity-acting the same as all the other wolves in the pack, including body language-was necessary to not being perceived as a dangerous threat. As dogs evolved into a separate species, they retained the same habits that wolves had before them. And it’s not just tails that fit into this equation. Other features of canine bodies used in communication with other dogs include their gazes (the act of looking directly at another dog is perceived as being a direct threat), their mouths (lips pulled back from the gums is a warning sign-a sign of “cave canem,” or “beware the dog,” if you will), and their heads (less dominant dogs will approach more dominant counterparts with their heads pulled downward, to represent their submission). When dogs wag their tails at each other, they are showing that they are ready to communicate with each other, and that they have no problems with each other. In this sense, the movement of the wagging tail serves as a kind of social cohesion between the dogs. When a dog first meets another dog for the first time, she might give a slight, tentative wag, to show that she’s putting out feelers to the potential of a positive relationship between the two of them. A broad wag is similar: aside from joy, it can also represent the promise that the dog will not present a threat to the other animal.

4. Does The Direction Of Tail Wagging Matter? 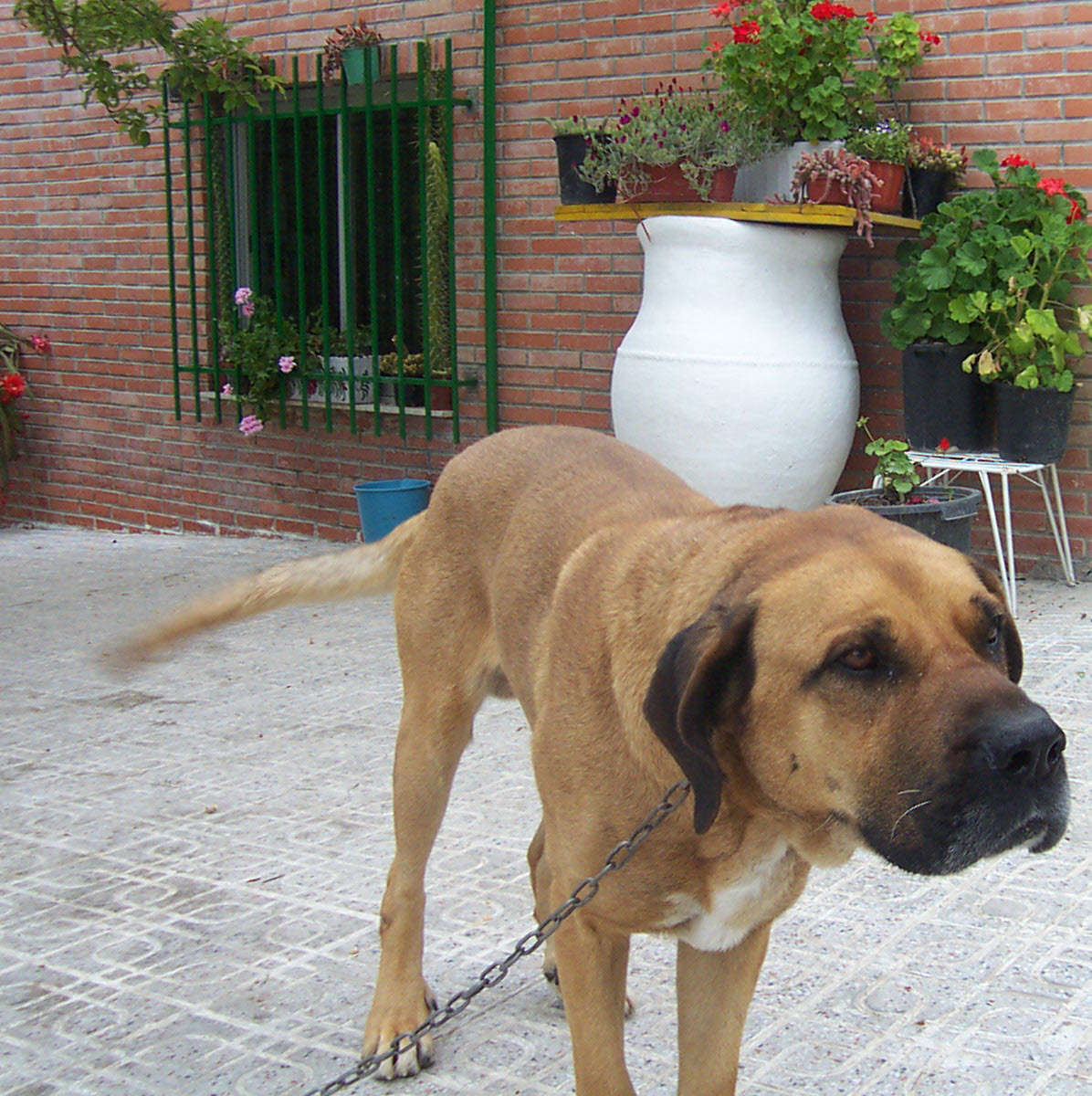 She might instead be experiencing nervousness or stress, however. This movement to the left, explains these studies, is controlled via the right side of the brain, which is also responsible for the emotions associated with withdrawal and being drained for energy. One study from the University of Trieste even revealed that dogs will wag their tails to the left when they’re in the company of unfamiliar-and, therefore, potentially threatening-other dogs.

5. More General Functions Of The Tail 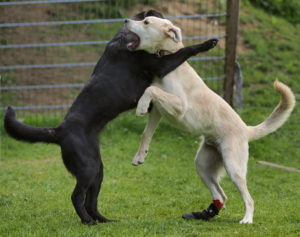 The function of the tail in dogs is the same as it is for many other animals: a tail helps a dog balance as he walks about on all four legs. His tail will also help him turning around while he’s running, or even provide a kind of guide or directional control while he’s swimming. Tail-wagging is both innate and learned. Although dogs will do it naturally, they will also do it more often once they have learned to associate it with a specific result, in the same way that humans-even blind humans, who have never seen smiling before-will smile both for both voluntary and involuntary reasons. “Sometimes you smile without knowing, and sometimes you can make yourself smile. I think dogs are the same with their tails. Sometimes it just happens, and other times it seems like they ‘think’ about it,” explains Dr. Stephen Zawistowski, an expert from the American Society for the Prevention of Cruelty to Animals (ASPCA). The same can be said for other body movements experienced by dogs: if they learn that a given movement is associated with a given reaction, then they will perform that movement in the relevant circumstances. One might even call this a Pavlovian reaction, given when the correct stimulus is provided. 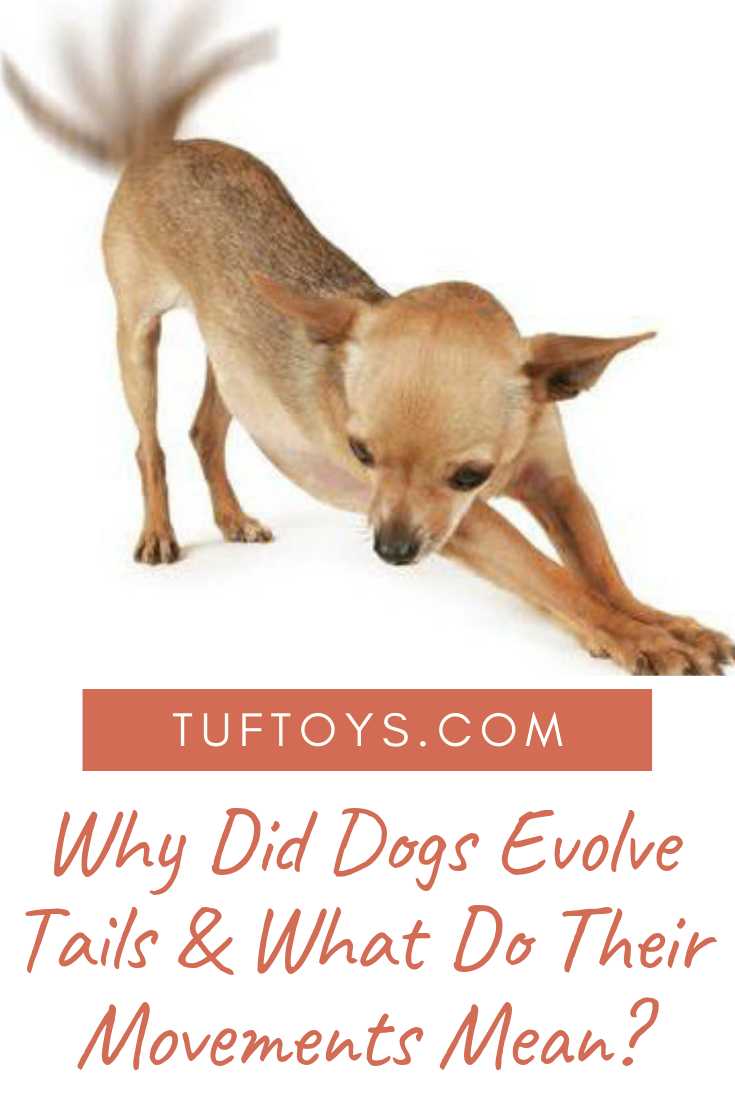 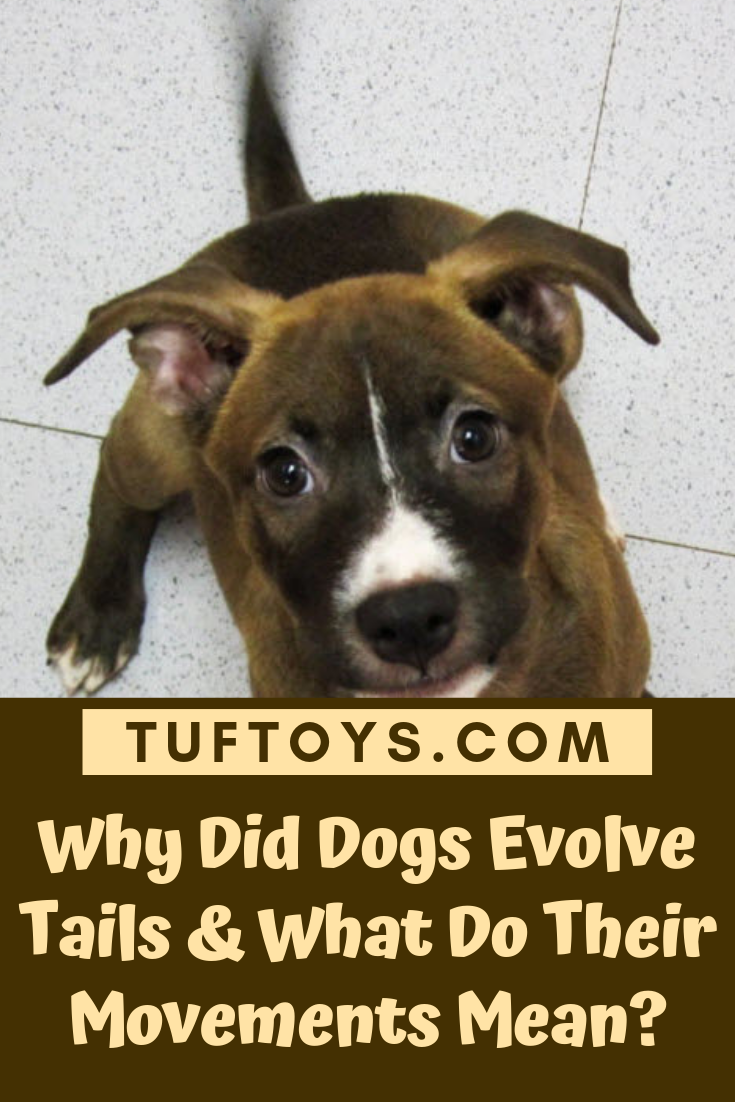 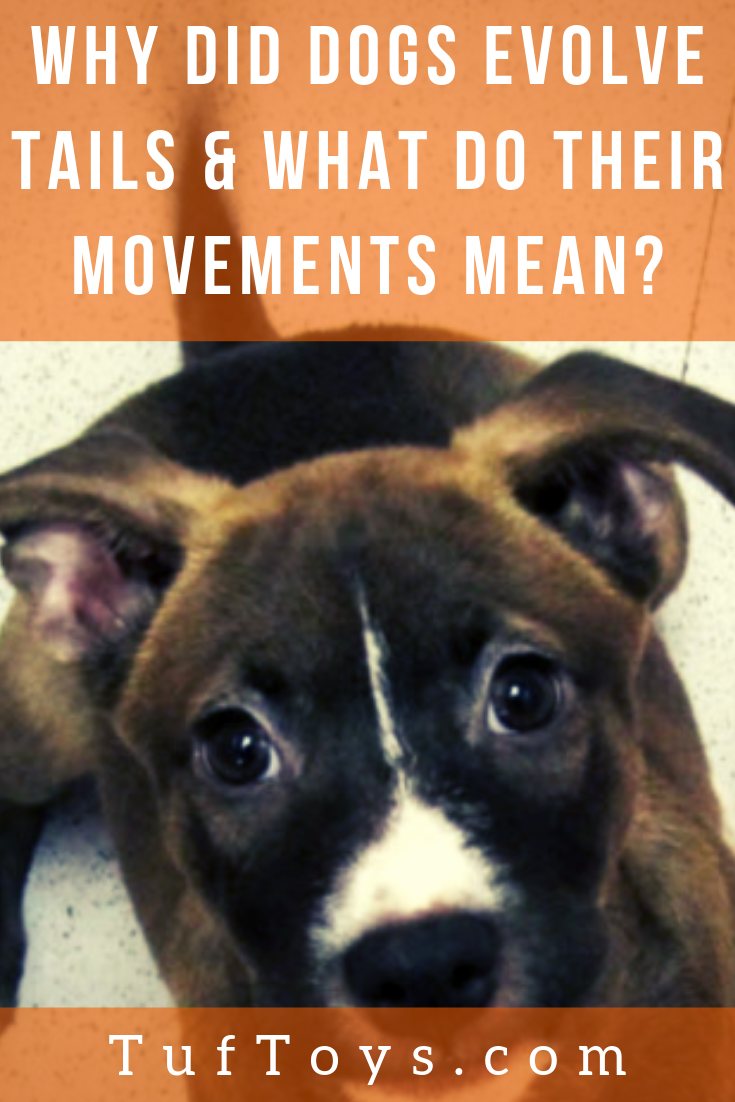 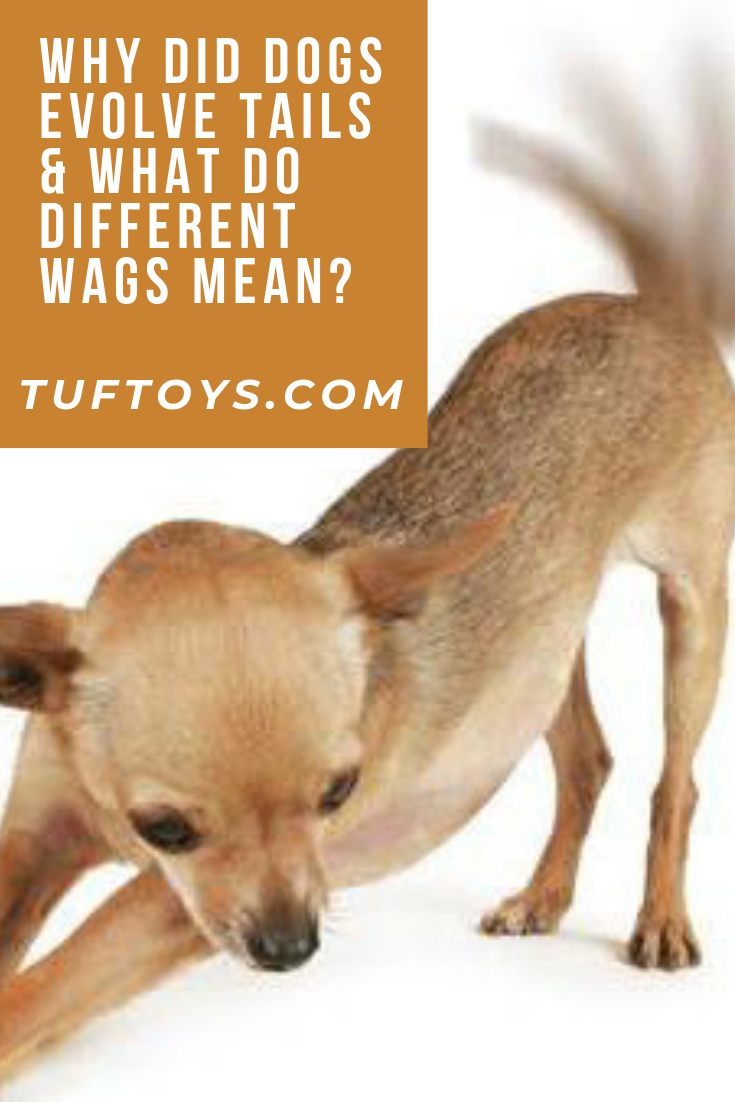