Why Do Dogs Play Bite & Nip? 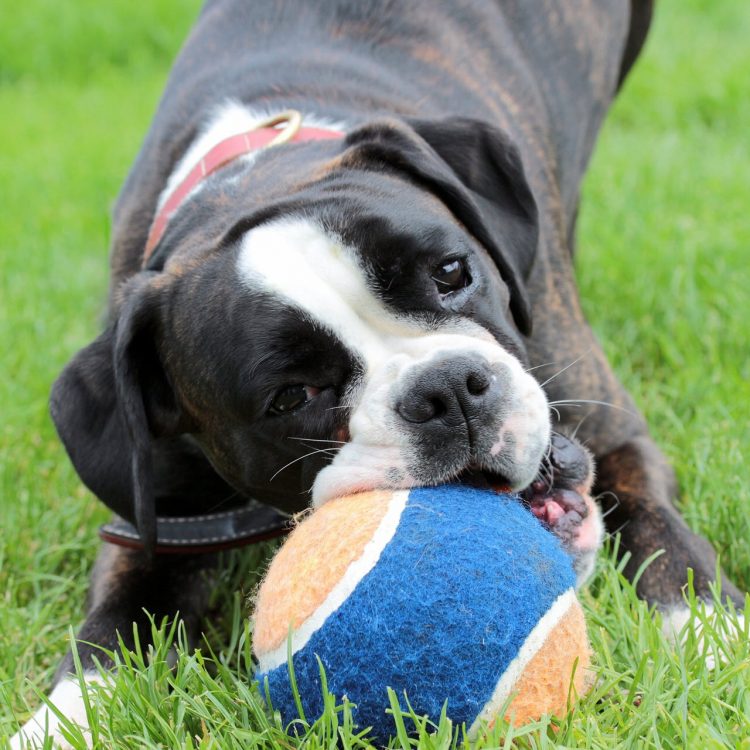 The Difference in Right & Wrong Behavior 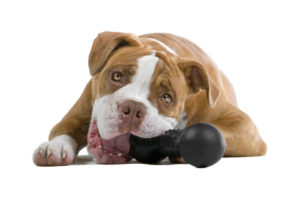 When it comes to training your new puppy, you need to learn to associate good behaviors in one group and wrong behaviors in another group, then setting a group of standards for dealing with these groups.  This is done by understanding that these are two separate objectives. The first objective of puppy training is to teach your puppy to do the things that you want them to do consistently. The second objective which can be harder is to teach your new friend not to do certain things that are considered wrong.

This is accomplished by trying to teach your puppy what you the behavior you desire from them and rewarding them for accomplishing these goals. As with a puppy, the list of right behaviors is usually smaller than the list or wrong behaviors, it becomes easier to offer rewards and harder to punish them. The more you focus and reward for good behavior, the less desire your puppy will have to act inappropriately. For example, it is easier to show your new puppy where you want them to go than to punish them for every little place they want to go instead. It is important to be aware of when they are acting in the right behavior and give them rewards. The nature of humans is to ignore favorable actions and only focus on negative actions. This behavior does not work with puppy training. By spotting when your puppy is acting good and then rewarding them, soon they will not want to act “bad” and focus only on the right behavior. 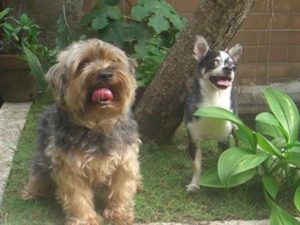 The importance is starting early and being consistent. Do not let the puppy do cute things like hopping on furniture if this is a behavior you would not tolerate in an adult dog. Below is a list of common right and wrong behaviors.

Right Behaviors For Your Puppy:

Wrong Behaviors For Your Puppy:

If your dog seems to get a little over excited while playing and often nips or play bites you may need to do some reconditioning to teach him what an acceptable bite force is. Depending on the age of your dog you can expect different behavior but if possible it is important to set ground rules from a very early age. Although if you haven’t don’t worry. It’s still possible to correct the behavior of older dogs.

Playful biting, or nipping, is common and very natural among dogs of all ages and breeds. Dogs explore the world using their mouths and their mouths are as important to them as our hands and eyes are to us. Nipping and playful biting is very different to aggression and shouldn’t be treated as such. It is a way for dogs to communicate, interact, explore and play. From the time they are born pups use their mouths to explore their den and their mother and to play with their brothers and sisters.

If young dogs don’t learn bite inhibition while growing up they can carry bad habits over into their older years and be a real handful for owners, especially if they are bigger dogs. This often occurs because the pups were removed from their litter before they had the chance to learn. Pups usually learn bite inhibition while playing with their siblings. If one pup bites another too hard the bitten pup will yelp loudly and stop playing with the offending littermate. Lonely and bored with no one to play with the biting pup will learn through social isolation that he bit too hard. The bitten pup also learns that biting is painful and will think before biting his brothers or sisters. This is one reason why puppies that are removed from their litter at an early age can be maladjusted and misbehave more than others who have learned social conventions from their littermates. 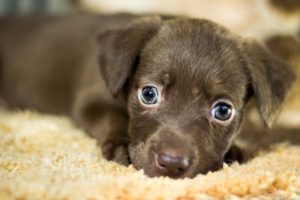 Although pups that have learned bite inhibition from their siblings do tend to be better adjusted they still need reconditioning when moving into a new home. One reason being that a person’s tolerance to bite pressure is generally a lot lower than that of a fellow dog and what your dog considers a friendly nip may in fact draw blood.

To teach puppies and even older dogs we can use a similar concept to that which they learn from in their litter while growing up. The following technique can be used for training older dogs and puppies although older dogs will require more reinforcement and a more time.

Firstly decide what level of pressure you are willing to accept from your dog. This will likely vary depending on the breed of dog. Some owners of large strong-jawed dogs will not accept any level of tooth contact while owners of smaller dogs mightn’t mind a little love bite. When you reach the level of tolerance with your dog (this could be slight pressure or just taking your fingers in their mouth) let out a loud yelp as if you’ve really been hurt and immediately turn your body away. Get up and walk a few feet and make sure to keep your eyes and face away. Don’t speak and don’t touch your dog for at least 20 seconds. The idea here is to teach through social isolation similar to how they would learn in the litter. But be careful not to give the dog too long so that they don’t forget what happened and start playing with something else. If there are other people around, make sure they do the same. After you return to playing with the dog be careful with your fingers as if you are hesitant to play with him and repeat the process if he bites you again. Hopefully, with a little repetition and patience on your part, your dog will quickly learn his lesson.

Most young dogs (and some older ones) seem to have a deep-seated need to chew on something, not unlike children of a certain age, although I’m sure the reasons are quite different. When playing with such dogs make sure the attention is not on your hands and give him a tough toy to chew on. Anything hard enough to withstand the punishment but with a slight give should be fine. If for some reason he finds your fingers more tempting than the toy and he gives you a nip respond with a quick ‘NO!’ This should startle him and make him stop. When he stops praise him and quickly refocus his attention on the chew toy. When he bites on that praise him again with a pat. This method should get the results you’re after.

I should mention here that in no situation should you use physical force to correct your dog for bad behavior. It’s not necessary and will most likely encourage further biting and more aggressive behavior. The cold shoulder technique has been proven to be the most effective method of showing your dog your displeasure. Your dog always wants to please you and your best tool in training is your authority and the admiration and respect your dog has for you. 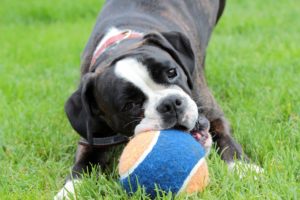 If your dog doesn’t seem to be learning from the cold shoulder technique and continues to bite and nip he probably needs some timeout. Have a crate or an area where he is isolated from you and other people that you can lock him in where there are no toys and nothing to keep him entertained and leave him there for a short time (5 minutes or so.) Your dog hates this social isolation and he’ll do anything to avoid it. When he comes back out try to tone down the level of play until you think he can play without nipping.

Some dogs will get overexcited and bite and nip at any opportunity especially during play time. For these dogs try to choose non-contact play when you can. Frisbee and fetch are great choices, even tug of war if your dog knows when to stop and will listen to your drop it commands. You should try to avoid rough play like slap boxing and wrestling as these types of games will encourage nipping and play biting and also stimulate your dog’s natural aggression which should be avoided.

I’m sure you’ve all heard that when learning something new it’s always best to learn it right the first time and that it takes a lot of work to undo bad habits. Well, dogs are no different and its best to get it right from the start.

One reason that dogs develop aggressive tendencies is that while they are puppies people tend to brush off their bad behavior as playfulness when really it should be dealt with at this early stage. Remember the expression ‘you can’t teach an old dog new tricks.’ While it may be possible to retrain older dogs its much easier to teach them while they’re young. 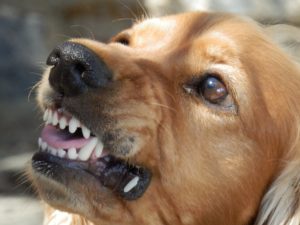 Dogs develop aggressive traits for a number of reasons. One common and unfortunate one is that their owners encourage this type of behavior. A lot of people get dogs to protect their property and they praise their dogs when they bark and growl at strangers approaching their homes. Dogs learn bad habits very easily and once made they can be hard to break. Never encourage aggression in your dog even when playing. Always keep your games light and friendly and make sure to give your dog plenty of love and affection.

When talking to dog owners I always say that punishing any sign of aggression towards humans is the best thing you can do and should be done from an early age. Many people worry that if they always punish their dogs for growling or barking, their dogs will become passive and that if one day someone breaks into their house their dog will be useless and likely try to lick the intruder. But if you train your dog to give one or 2 short sharp barks every time someone approaches the house, trust me, you will not have a problem with break-ins.

What you should do is react quickly to the first signs of aggressive behavior shown by your dog. This could be a soft growl, barking or a stiffening of the body. Usually, a strong ‘no’ command will do the trick. One mistake a lot of people make is petting their dog to try and sooth them when they display aggressive behavior. All this does is teach your dog that its OK to be aggressive towards humans.

Your dog’s confidence can also be a factor in their behavior. Timid or fearful dogs (much like timid and fearful humans) tend to be more aggressive and confrontational. So build your dogs confidence with a lot of praise for doing things right and avoid unnecessarily scolding your dog.

Having a well well mannered friendly dog that behaves well around new people makes life easy for dog owners. Having to worry that your dog may bark at or even attack your guests can cause a great deal of stress and take away from the pleasure of owning a dog. (Not to mention scare your guests away.) So raise your dog right and make sure they develop good habits early. If you’re worried that your dog is displaying abnormal aggression it’s really important that you get to the cause of it.