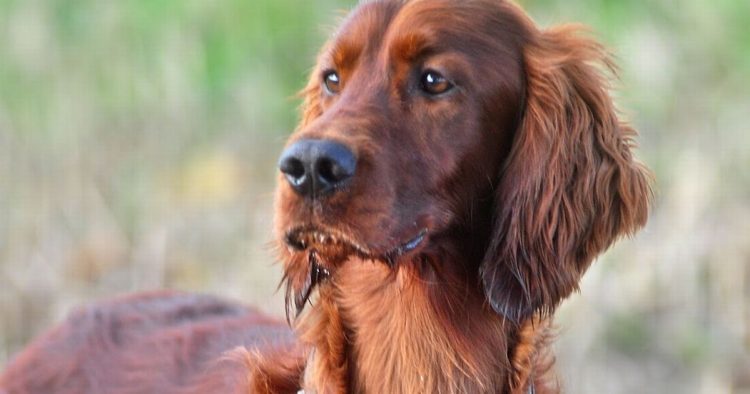 Herts Live has joined forces with our brand new sister site, TeamDogs, and the fabulous Pooch & Mutt food for dogs company, to find out which dog breed really is the nation’s favourite.

Here, Andrew Forgrave champions Irish Setters and explains exactly why they are the best breed.

If you agree – or even if you disagree – we’ll give you the chance to vote in the search to find the UK’s favourite dog breed.

Chase is the one that gets the pats from fellow dog walkers, not Billy, our slightly scruffy, wonkey-eyed Bichon.

“You don’t see many Red Setters these days,” they say.

Eyeball roll. “Irish Setters, you mean?” But it’s true. They’re not abundant and that’s a mystery, for you won’t get many breeds that will beat them for looks, friendliness and fidelity.

Irish Setters are incredibly tactile. They don’t just stand by you, they lean into you. Sprawl on a couch and it’s like tangling with an orangutan.

Another thing you learn when you have a Setter: you’ll struggle to beat them in a staring match.

At one time Chase looked set for show ring stardom. At 18 months he began winning dog shows, some prestigious. Crufts beckoned but never came. He had star power but his sole training consisted of countryside walks, never good for catwalk canines.

Talking of shows, we need to mention grooming. There’s no way of soft-soaping this: Irish Setters can be high maintenance. All that lovely, flowing auburn hair looks lovely in full flight but it tangles quicker than dog hair on a vacuum cleaner.

Take them for a walk and, like some woodland priestess, they’ll return with half the countryside in their hair.

To prevent knots, the undercoat needs thinning out regularly with regular brushing, and probably much more besides. Otherwise you’ll find that, like us, you may be reaching for the scissors and having to cut out fist-tight balls of matted felt.

As Setters shed their hair, be prepared. Unless you have red carpets, it’ll show quickly. Setters are lovely but they don’t half clog up your Hoover. Billy too: he’s a scavenger, and sharing a house with a shedding Setter means his poos emerge like strings of sausages.

Chase is six-years-old now, and his diet is ravenous. It wasn’t always so. As a young dog he was a reluctant eater, though it didn’t stop him devouring the kitchen: walls needed replastering and skirting boards replacing.

We soon learned not to leave anything on kitchen surfaces. Paper kitchen rolls were a favourite plaything: he just loved leaving the place knee-deep in blue Blitz.

He grew up. Became the best dog we ever had. Not the brightest, it’s true, but still the best. Even better than Collies, and that’s quite a claim.

Chase? That’s the trouble when your young, impressionable daughter is in charge of naming.

It’s an American affectation that has since back-fired, fond as he is of socialising with dogs the far side of fields.

We soon learned that recalling him with shouts of “Chase… CHASE!” would earn us pained looks from aggrieved dog walkers.

Otherwise he’s a wonderful dog. Despite a slightly ungainly gait when not at full pelt, he has a classic, noble profile and a lovely, loyal temperament.

Setters are biddable and easily trained. To do the basics, anyway. If you want your dog to ride skateboards or juggle plates or solve algebra, Setters are probably not for you.

But if you want a “proper” dog, a lifelong companion and a head-turner all in one, Setters can’t be beaten.

In a world of bland Labs, ubiquitous Cockapoos and yapping laps dogs, they stand out from the crowd.

Want the latest Herts news direct to your inbox? Sign up here.